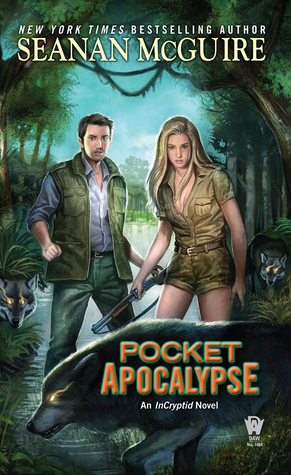 Alexander Price has survived gorgons, basilisks, and his own family—no small feat, considering that his family includes two telepaths, a reanimated corpse, and a colony of talking, pantheistic mice.  Still, he’s starting to feel like he’s got the hang of things…at least until his girlfriend, Shelby Tanner, shows up asking pointed questions about werewolves and the state of his passport.

Australia is a cryptozoologist’s dream, filled with unique species and unique challenges.  Unfortunately, it’s also filled with Shelby’s family, who aren’t delighted by the length of her stay in America.  And then there are the werewolves to consider: infected killing machines who would like nothing more than to claim the continent as their own. The continent which currently includes Alex.

Survival is hard enough when you’re on familiar ground.  Alex Price is very far from home, but there’s one thing he knows for sure: he’s not going down without a fight.

I came upon Seanan McGuire’s books when I read the first one in her October Daye series, “Rosemary and Rue”. The title caught my attention, which is often why I choose a book. I knew rosemary is used in spells and meant for remembrance, so I figured this book would have something to do with the supernatural.  While it’s not about witches, it does have to do with Fairies and their Courts, along with some other supernatural creatures.

I had to pause here in writing my review because although I knew what rosemary is for, I didn’t know for what rue is known. So after a Google search, I found out it’s known for grace. I have to wonder why I didn’t Google that a long time ago.

There are a fews series that I eagerly await the next book, and October Daye is one of them. I love all the books in the series, so I was really excited when she came out with the InCryptid series, which “Pocket Apocalypse” is number four in. I started this series because it’s by McGuire, but even if I had never read anything by her before, I would have still picked up book one because of the title, “Discount Armageddon”.

The Incryptid series follows the adventures of the Price family while they investigate various inhumans. The first two books focus on one of the Price children, Verity Price, who is a professional dancer when she’s not running over rooftops chasing after bad guys. I really enjoyed Verity’s sass, and the stories.

The third and fourth books focus on the brother, Alex Price. Whereas Verity enjoys urban settings, Alex works in a zoo and likes a quieter life. In book three, Alex meets Shelby, and when she asks for his help in this book with the werewolves that have invaded her home in Australia, Alex reluctantly agrees. Not because he doesn’t want to help Shelby, but because his first experience with werewolves was not a good one.

Now for the reason it’s taken me so long to write this review. I have really liked everything else that I have read by McGuire, but this one was just okay.

Alex is met with hostility once he gets to Australia, not only by Shelby’s family, but the rest of the group of people he is there to help. Brief backstory: there is a group called the Covenant that the Price family use to belong to. The Covenant would just go in and eradicate everything that was not human. Some of Alex’s ancestors came to the realization that this was not the way to go, so they defected. But most people still question their associations.

Okay. I understand there is going to be hostility, and at first it’s is a bit amusing, especially when Shelby’s sisters threaten his life. But it got old really fast, and it lasted more than halfway into the book. If McGuire had taken all of that out, this would have been a novella instead of a book.

Although I was disappointed with this book, I was happy that the Aeslin mice were featured more in this story, since I love those little creatures. The Aeslin mice are thought to be extinct, but they worship the Price family as Gods, and are the keepers of their family history. Who wouldn’t want a group of mice celebrating all the achievements in your life!

Even though this book wasn’t as good as the others in the series, I would say still read it. Maybe just skim over the hostility, enjoy the mice, and look for the one thing that advances the story plot.

And make sure to read the October Daye series if you haven’t already. I would also say give McGuire’s website a view. She has lots of additional background information that will only enhance your reading pleasure. She also writes music, and has a couple albums available online, which I look forward to checking out.