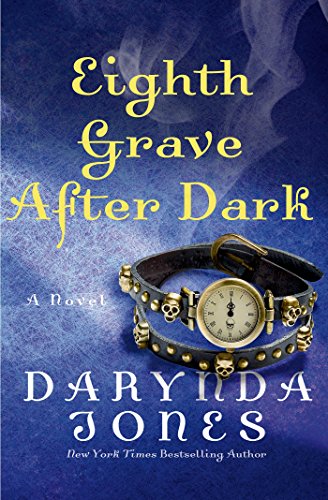 Sometimes I wonder if the purpose of my life is to serve as a cautionary tale to others. –T-shirt

Charley Davidson has enough going on without having to worry about twelve hellhounds hot on her trail. She is, after all, incredibly pregnant and feeling like she could pop at any moment. But, just her luck, twelve deadly beasts from hell have chosen this time to escape onto our plane, and they’ve made Charley their target. And so she takes refuge at the only place she thinks they can’t get to her: the grounds of an abandoned convent. Of course, if hellhounds aren’t enough, Charley also has a new case to hold her attention: the decades-old murder of a newly-vowed nun she keeps seeing in the shadows of the convent.

Add to that the still unsolved murder of her father, the strange behavior of her husband, and Charley’s tendency to attract the, shall we say, undead, and she has her hands full…but also tied. While the angry hellhounds can’t traverse the consecrated soil, they can lurk just beyond its borders like evil sentries, so Charley has been forbidden from leaving the sacred grounds. Luckily, she has her loyal team with her, and they’re a scrappy bunch who won’t let a few thirsty hellhounds deter them.

I love, love, love this series. And this book did not disappoint. If you haven’t read the Charley Davidson series yet, go and get yourself the first book, “First Grave on the Right”, and then come back and read this review!

I came across the first book and was drawn to it because of the awesome pair of silver skull sandals on the cover. I then read the insert where it talked about a grim reaper who is super sassy and helps her father, who’s a cop, solve mysteries. Every part of that description matched what I enjoy reading. Plus I had just finished the TV show Dead Like Me, and was jonesing for some more grim reaper action.

This series is one that should be read in order. There is some much character building and bit characters that are important, that to get the full impact of the story, it’s best to start at the beginning.

Charley was born a grim reaper, and by book eight you find out that she is much more than a reaper. While her powers do grow a bit throughout the books, it isn’t until this one that it becomes a real game changer. I’m excited to read number nine, because I think Jones can take this story into a completely different kind of genre if she wanted.

Charley is very sassy, especially to her best friend and office assistant, Cookie. The interplay between the two is hilarious. Then you have the hot love interest with all of his dark secrets, Reyes.

There’s the ghosts that Charley can see that do not want to cross over. Strawberry Shortcake, because of her pjs, is a bit of a scary kid. Then there’s Rocket Man, who writes down all the names of the dead. And his sister Blue Bell, whom we don’t see too often, but I’m wondering if she’ll become more important soon.

There’s also Angel, a dead gangbanger who helps Charley gather information during her investigations. And Mr. Wong, who just hovers in the corner of her apartment. But we finally find out who he is in this book. Artemis is also a ghost, a 90 pound rottweiler guard dog, that likes to trip Charley in the shower because of her playfulness.

There are so many more characters and things I could say, but it would  give too much away. You really need to read the books for all the intricacies and for the a-ha moments. I am totally jealous of you if you’ve never read them because you get the joy of experiencing it for the first time!

The biggest reason I like this series is each book is an excellent read. In a lot of series by book four or five, you will probably get a not so good one, or the series will just keep going down hill. But not so with these books.

Eighth Grave After Dark is the culmination of so many questions that finally get answered. Even though it’s taken Jones this long to answer some of the questions, I think it was completely worth the wait.