Only in My Dreams by Darcy Burke : Book Review 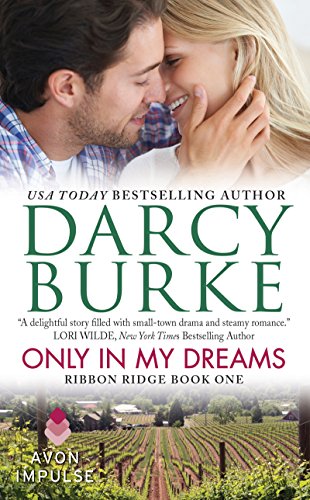 Fed up with her self-imposed single life, successful event planner Sara Archer heads to a bar for a night of dancing … and bumps into Dylan Westcott, a high school crush she hasn’t seen in years. Harmless flirting leads to a hot, completely uncharacteristic one-night stand. But when she wakes up alone, Sara knows there won’t be a repeat.

Dylan, a divorced, ex-military construction contractor, limits himself to casual flings—his failed marriage proves he’s better off alone anyway—but he can’t stop dreaming about Sara. And when his firm is hired to oversee the renovation project run by the Archer siblings, the two are unable to resist their explosive chemistry.

But when their secret affair grows beyond “friends with benefits” and neither is willing to admit they want more, family drama and emotional scars may ruin their chance at a love they believed was only in their dreams.

This is the first full length book in the Ribbon Ridge series. The novella, Where the Heart Is, introduces the reader to this series. You can find my review for it here.

The book quickly starts out with a bang after Sara sees Dylan at a Western bar, and she decides to do something completely out of her character, have a one night stand. The very steamy sex scene was a great way to start the story.

I’ve read that the best relationships start out when you are friends first. But sometimes you are just so attracted to each other, you just have to go with the flow. And if you become friends after, all the better.

I was a bit confused with the next part, and at first I thought it was a flashback. Sara’s brother , Alex, commits suicide. I thought his part was a bit of back story, which needed to be told. But it wasn’t until the next chapter that I realized that it had been happening while I was reading it, and not a flashback.

At this point two months had passed, and Sara and Dylan meet again when he tries to get the construction contract for the upcoming Archer project. The attraction is still there, and just as hot. But they decide to keep it quiet, so it doesn’t reflect poorly on their working relationship.

Their sexual attraction starts leading to more complicated feelings for both of them. They try to comes to terms with this in various ways. But everything they try ends up causing more problems. You’ll have to read the book to see what Sara and Dylan finally decide.

One of the things I really love about this series is the multidimensional characters. Burke isn’t afraid to write about things that people don’t always talk about. Alex having health problems which leads to depression, and eventually to suicide. Sara has Sensory Processing Disorder, something I have never heard of before. And I believe one of the other Archer siblings has autism.

I would highly recommend this series, and can not wait to read the next book, Yours to Hold.

*I was given a copy of the eBook via the promotional team. All thoughts and opinions are my own, and I was not given any money or material incentives for an honest review of this book.