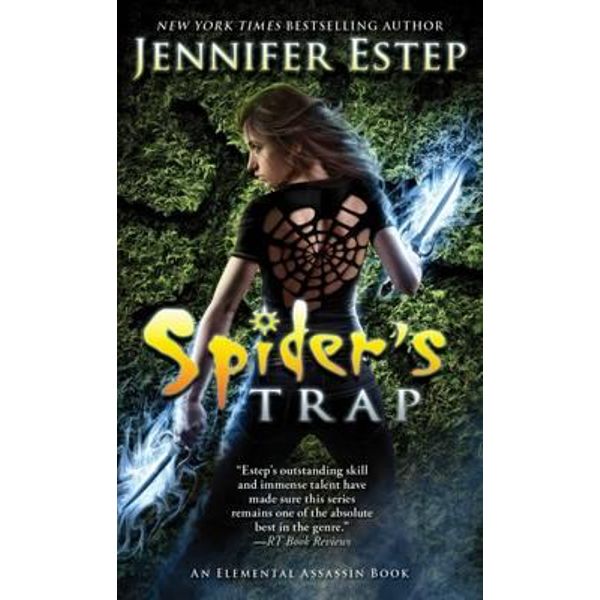 Keep your friends close but your enemies within stabbing distance.

One important lesson I’ve learned in the assassination business is that to be the best you have to roll with the punches. Now that I’m queen of Ashland’s underworld—by default, not by choice—a lot more punches are being thrown my way. But I suppose that’s the price of victory for taking down some of the underworld’s top dogs. Good thing I have my Ice and Stone magic to help me survive my volatile new position. Just when I think things are finally settling down, someone tries to murder me during a hush-hush underworld meeting. But the real surprise is how strangely familiar my shadowy assailant seems to be.

My job is to maintain order among killers, crooks, and thieves, and soon I’m embroiled in a bloody game where the ability to keep secrets could be the greatest superpower of all. My enemies have all sharpened their knives and laid their traps, waiting for me to fall. But this Spider weaves her own webs of death…

Spider’s Trap is the 13th book in Jennifer Estep’s, Elemental Assassin series. Being lucky number 13, I was hoping it would be spectacular, but that wasn’t the case. Don’t get me wrong, it was a good book, but it didn’t have the pop that some of the past books in this series did.

Some series you can pick up a few books in, or even just pick up one of the later books and you can piece together what is going on. Not so with this series. You should start it from the beginning. And although I do not think Spider’s Trap was a strong book in this series, I still highly recommend reading the series.

Gin, (like the drink) is finally known to all of Ashland’s underworld as the infamous assassin, aka Spider. Not only is her secret out, but after book 12, she has become the new leader of all the bosses, even though she didn’t and doesn’t want the gig.

The story starts out with a bomb aboard a gambling boat where the underworld bosses have gathered to try to sort out a tiff in regards to who should get some laundromats to be used in laundering their money.

Gin, assassin extraordinaire, goes to investigate and finds a ruin in the shape of a mace. Something keeps tugging at her memory, and she knows that she should recognize that symbol.

Now here’s the part that really annoyed me and turned the book from what could have been great, to just okay. It took her until chapter 13 (ironic?) to figure out why the ruin looks so familiar. Because of this, I felt like Estep didn’t have enough for a full book, so she added extra words in regards to “where do I know this from” to fill out the book.

The way Estep dealt with this was by having Gin have dreams with bits and pieces of flashbacks, leading to finally figuring it out. The fact that that this majorly traumatic event that happened when she was a teenager had completely slipped her mind. I just can’t get behind it.

I realize trauma is a tricky thing. But Gin has had numerous traumatic experiences, it didn’t happen when she was a child, and she’s come to grasp that the world can be a horrible place, so I just can not believe that it would take her that long to remember.

Once you get past that part, the story moves along at a rapid pace. You get even more back story on the other characters whom I have come to feel as if they are friends. The ending feels a bit rushed. But I often feel this way with Urban Fantasy. As with most of the genre, the majority of the book is spent tracking down the bad guy or solving the mystery and then there’s the big fight. After that, the book is pretty much over.

In this book the end fight did keep going longer than usual. And here I have a bit of a problem too. The damage that is dealt to each other with various elemental magics, seems past the point of possible. Yes, you have to suspend your grip on reality when reading fantasy, that’s why I love it so much, but the abuse Gin took was bordering on unrealistic. Especially if you look at how much damage her body takes in previous books, and how quickly she gets hurt. The way that I was able to overlook this, but barely, was that she is growing stronger in her elemental magics, which are rock and ice.

I think paired with taking thirteen chapters to remember, this just irked me more than it normally would.

I realize I put a lot of negative in this review, but not every book in a series is going to be epic, and this just happened to be one of them. Estep does set it up so in the next book the big bad seems like it will take the book into a cool direction. So I am very much looking forward to book fourteen.

So if you haven’t already added the Elemental Assassin Series to your list of books to read, starting with book one, Spider’s Bite, you really should!

*I was given an Advanced Reader’s Copy by the publisher via NetGalley. All thoughts and opinions are my own, and I was not given any money or material incentives for an honest review of this book.