In the Air Tonight by Lori Handeland : Book Review 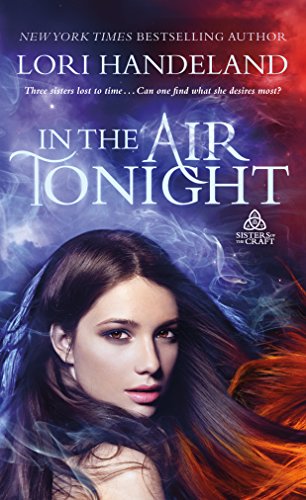 Four centuries ago, in a small Scottish village, three baby girls escaped the wrath of a witch hunter. Today, one young woman will learn about her secret history, her heart’s destiny, and the sisters she never knew she had…

With her blue-black hair and dark eyes, Raye Larsen has never fit in with the Scandinavian community of New Bergin, Wisconsin. Being adopted is part of the reason she feels like an outsider, but what really sets Raye apart is her ability to see dead people. Everywhere.

She’s learned to keep her visions to herself…until she stumbles onto the ghost of a murder victim who needs Raye’s help. Enter Bobby Doucet, a distractingly handsome homicide detective who has been tracking a killer all the way from New Orleans. What she discovers about herself could destroy everything she knows…and everyone she loves. Is finding the truth worth the risk?

This was the perfect Supernatural Fantasy for me. The main character was a witch (my favorite because they really exist), the new relationship wasn’t annoying (does he like me/maybe I shouldn’t like him/Blah/Blah/Blah), the sex scenes were done well (and there was the perfect amount), and I have two more books to look forward to in this trilogy.

And it takes place in a small town in Wisconsin!

Usually you have two types of witch stories. The witch knows they are one, and usually comes from a long line of powerful witches. Or they have no idea and eventually find out about their powers. This book was the latter.

Raye, who can see ghosts, doesn’t know she is an Air Witch. She was adopted and learned early on to hide that she can communicate with ghosts, after over hearing her father talk about giving her back. Her adopted mother died, and Raye is still trying to prove to her father that she is perfect and normal.

The book starts with a person being burned out on the street, in the small Wisconsin town that hasn’t had a murder in many years. Homicide Detective Doucet is notified in New Orleans about the case, since the MO matches some cases he’s been working on. Doucet is driving into town when he finds Raye fleeing from her apartment because she is being attacked by a knife wielding maniac.

When he goes to check it out, he finds no one. When he questions Raye about it, she says she must have just imagined it. There is no way she is going to tell a complete stranger that she can see and talk to ghosts.

They quickly fall for each other. For some readers this might be too fast, but I thought it worked. Raye had always been an outsider in town, and to finally have someone who she can feel comfortable with, can bring on some strong emotions.

There are more deaths, and since Doucet is convinced that the killer is still after Raye, they stay together while investigating.

The one thing that did annoy me was how clueless Homicide Detective Doucet was about the supernatural. He choose not to believe in it because he had a bad experience with clairvoyants in the past. That’s all fine and dandy, but to be utterly out of the loop, no, I don’t believe it.

First off, he’s a detective. Some weird supernatural stuff had to have come up in his career. In fact his current partner went a bit crazy thinking he saw werewolves. Then there’s the internet, and every other TV show has something to do with the supernatural.

I realize it was used as a plot device, to clue in any readers who may not be familiar with witches, but ugh! Since Raye is new to being a Wiccan, she could have been the one doing research, and then letting the book reader know what she found.

There was also a side story about a little boy, Stafford, who is a ghost haunting the class that Raye taught. Handeland crafted this story line wonderfully. It helped to flesh out an aspect of Doucet’s life, and it was a mini mystery, inside the bigger mystery.

I am really looking forward to the rest of this trilogy. Heat of the Moment comes out June 30th, and Smoke on the Water is coming out August 4th