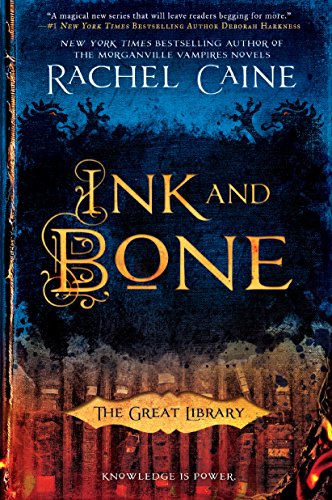 Ruthless and supremely powerful, the Great Library is now a presence in every major city, governing the flow of knowledge to the masses. Alchemy allows the Library to deliver the content of the greatest works of history instantly—but the personal ownership of books is expressly forbidden.

Jess Brightwell believes in the value of the Library, but the majority of his knowledge comes from illegal books obtained by his family, who are involved in the thriving black market. Jess has been sent to be his family’s spy, but his loyalties are tested in the final months of his training to enter the Library’s service.

The book instantly reminded me of Harry Potter. A smart kid not treated well by his family. Going off to school where he has a strict instructor. Jess becomes friends with a super smart girl and his best friend is a lovable guy who will be by his side no matter what.  There’s also a fellow student who is viciously out to get Jess. And they find out that there is an evil force wanting to stop anyone who doesn’t think the same way.

But there is so much more to this book besides…

I like the alternative history angle of the story. The idea that the printing press as technology is continually surpresed by the Library of Alexandria is an interesting parallel to the world we live in with social media. It shows how the proliferation of ideas in countries where the media and internet isn’t government censored, to a comparison of countries like China, where it is censored. The book stresses the continual fight between the natural tendency for technology to advance in a way that allows for ideas to spread and the struggle of a power structure to control those ideas.

What’s even more interesting is the question of who or what is allowed to generate new ideas, which is not really addressed in this book. In Ink and Bone the Library of Alexandria works very hard to obtain, preserve and make available, in a controlled way, the classic and existing texts. But in a world where the library controls the distribution of books and the content within those books, the regular people are not the  idea makers. It is very hard, next to impossible, for their ideas to proliferate.

Another really intriguing element to the story is the diary that everyone is encouraged to keep. These journals are an historical archive of every person’s life. They are treated with such reverence and respect, but are also revealed to be not at all private in the way they were thought to be.

This is a not so subtle jab at Facebook and social media in general, where we give away so much personal information in exchange for social approval, but at the same time give away any or all semblance of privacy.

Wrap around all of these thought provoking ideas with a couple of love stories, friendship, magic and slavery, and you’ve got yourself a really good story.

*I was given an Advance Reader’s copy by the Ace/Roc promotional team. All thoughts and opinions are my own, and I was not given any money or material incentives for an honest review of this book.