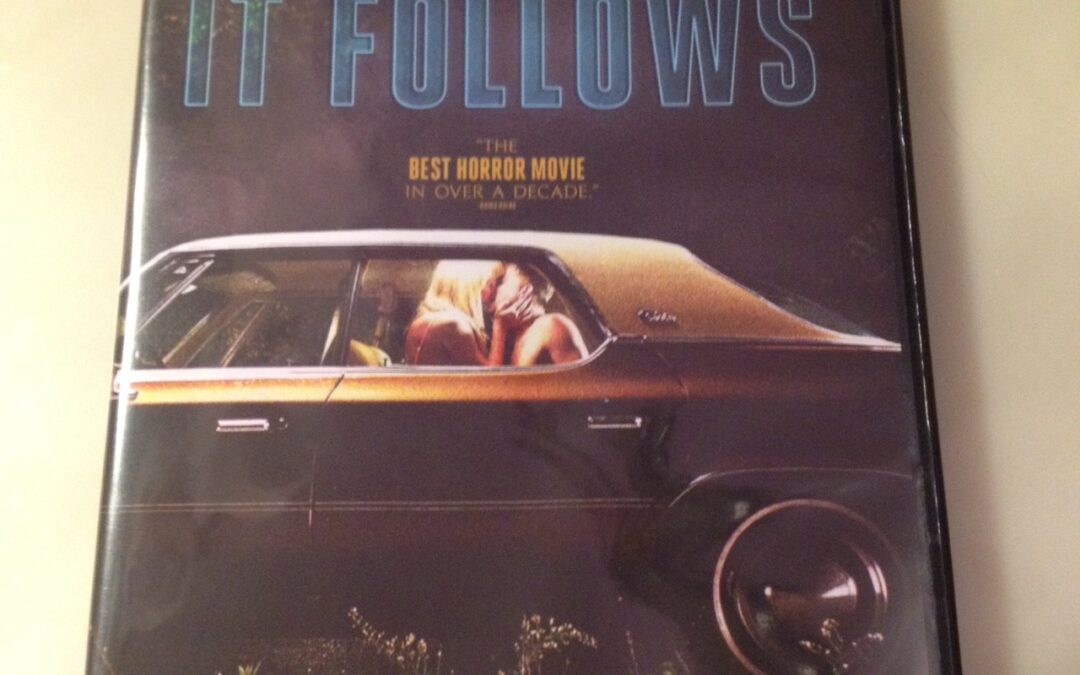 After carefree teenager Jay (Maika Monroe) sleeps with her new boyfriend, Hugh (Jake Weary), for the first time, she learns that she is the latest recipient of a fatal curse that is passed from victim to victim via sexual intercourse. Death, Jay learns, will creep inexorably toward her as either a friend or a stranger. Jay’s friends don’t believe her seemingly paranoid ravings, until they too begin to see the phantom assassins and band together to help her flee or defend herself. -Google

I am not sure what all the hype was about for this horror movie. The critics on Rotten Tomatoes gave it 96% fresh and 66% of the audience liked it. I am definitely more in line with the audience.

I kept hearing that it was so intense, and that you’d be scanning everyone in the background to see who is after the victim. Um, no. It was completely obvious who was after the intended victim. Most of the time the scene was so bare of other people, there was no other choice as to who it would be.

The main character’s acting just checked out after she told her friends that something was following her, and when they finally believed her. Jay looked comatose, constantly lying against her friend, or even just straight up sleeping. I would think she would be way more hyped up, on constant alert, and afraid of going to sleep. More like a Nightmare on Elm Street vibe.

You needed to have sex to pass it onto the next person, so the creature would be after them instead of you. What if she were to have sex with three different guys at the same time? (Yes, one in each opening.) Would it pass on to all three of them? It might make me a slut, but I would try it, just on the off chance it worked. The creature having to kill three people before it got back to me is way better odds than just one person.

And the end scene in the pool where the creature is throwing electrical items at Jay. Okay, I suppose I can go with each item coming unplugged from an electrical source before it hit the water. But some of them were on really long extension cords. Every single one the creature threw was on a short cord??

The other thing with the pool, they are in the most run down part of Detroit and every building near by is super run down or vacant/vandalized. But here you have this gorgeous brick building in perfect condition. Even better it has running electricity and a huge, well maintained swimming pool. No. Just No.

And what was up with Jay’s friends (Annie?) giving a monologue about not being able to go past Eight Mile when she was a kid because that’s where the suburbs ended and the bad part of town began. Since the writer is from Michigan, this was his nod to his home state, but it served no purpose to the plot, and in fact just stood out as super odd.

This is such a minor thing, but Jay’s cast. The first time she’s just walking around her pool with the cast on. That’s super fun. At least be on a raft floating around. And then later on she’s in actual bodies of water. Even if it’s a fiberglass one, you are not to get it wet. I know a stupid, picky thing, but just one more thing to add to the list of annoyances.

And where the hell were all the parents in this movie. I know it’s a typical horror movie, and the parents need to be elsewhere for the teens to get into trouble. But every other adult was home. A woman unpacking her groceries, lots of people doing yard work, etc.

What I took away from this is if you are a teen/young adult, do not have sex. You will get an STD, maybe even a supernatural one.

There were a couple good parts; the musical score did it’s job by keeping me off balance a bit, and it did provide some tension. I also enjoyed the cinematography having a more 80’s slasher movie vibe to it. But at points where the camera is scanning the scene 360 degrees looking for the creature, I had to close my eyes because it was making me queasy. But that may have been the objective, if so, well done.

Although it may not seem like it, I really do feel bad not having liked it. I was so excited to find a good horror movie, since they are rare lately. But alas, No. Just No.