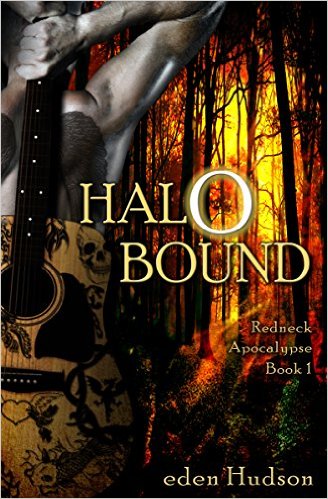 The holy champion chosen to save the world is enslaved to a sadistic fallen angel and losing the battle for his sanity.

The guy chosen to save the holy champion is his binge-drinking redneck brother.

So, basically, the world is screwed.

Colt—a mentally unstable holy soldier with a rapidly deteriorating hold on reality. His last plan to rid the world of evil either failed horribly or went off without a hitch. With the constant torture and brainwashing, it’s getting hard to be sure of anything but the sick attachment he’s developing to his beautiful tormentor.

Tough—a smart-mouthed honky-tonk hero trying to drown his problems in music, women, and good times. He hasn’t spoken to Colt in five years—not since their disagreement over a nymphomaniac vampire turned into a drunken slugfest—but they’re still brothers. Tough knows he can’t leave Colt fighting for his life and his sanity alone. The question is whether Tough can fight off his personal demons long enough to save Colt from the literal ones.

I need to start reading chapter titles. The last few books I’ve read had a different character’s name for the title, and I just haven’t paid attention. I would have been able to follow along better if I had.

And I thought Mikal was a man at first. My bad to assume. And it was amusing, because eden Hudson even mentioned later on something about one of the characters thinking Mikal was a guy. Alright, enough of that little side note.

I thoroughly enjoyed this book. Even though I live in a very northern state, and this takes place in the South (Missouri), I felt as if I have known people like this when I was in my twenties. I guess Redneck is Redneck, and it doesn’t matter what state you’re in.

And when I say know people, I mean binge drinkers, alcoholics, overly aggressive females, gamer guys who really don’t want to do more with their lives. Not fallen angels who keep sex slaves. Or people with enough hardware in their shed to take down an army.

Although I do live in Wisconsin, and we’ve had people like Gacy and Dahmer living here, so one never really knows.

Although there is plenty of action in this book, it’s more character driven. Hudson does an excellent job of developing them. She writes from three characters points of view.

Colt, the middle brother who tried a last ditch attempt to save the world after his parents and two siblings were killed by an army of fallen angels. And then ends up becoming a sex slave to the main angels right hand woman.

Tough, the youngest brother who ran off after his family got killed, but was forced to come back to Halo. Even though he knows his brother is behind enemy lines, he’s too drunk and depressed to do much about it.

Modesty, aka Desty, who comes to Halo looking for her twin, and ends up finding Tough. Love ensues, but will it be enough to overcome the messed up situation in Halo.

This book focused more on Tough and Desty, but the next book, Hell Bent, will be focusing more on Colt, who hears voices and is slowly going crazy…. or is he?

I can’t wait to read it and find out!

*I download a free eBook copy. All thoughts and opinions are my own, and I was not given any money or material incentives for an honest review of this book.