Heat of the Moment by Lori Handeland : Book Review 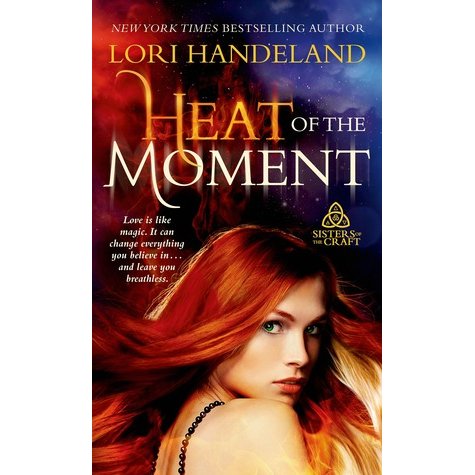 A spell that tore three sisters apart is broken four hundred years later, when the magic in their blood reunites them. Now, one of them will discover her gift-and reignite a love long thought lost…

Flame-haired Becca Carstairs was born to be a veterinarian. Since childhood, her affinity for animals has been special, and her healing touch nothing short of magic. But only Becca knows the truth-that she alone can hear the creatures’ voices. She’s always trusted her sixth sense…until a string of missing pets, an attempted murder, and a face from her past converge into one explosive mystery, with her at its center.

Is haunted Owen McAllister, the boy who broke her heart ten years ago, related to the sinister crimes that have peaceful Three Harbors, Wisconsin, on its guard? Or is his reappearance part of the answer to questions that have troubled her all her life? As Becca delves into her strange heritage, she’ll have to fight for her life…and the man she will always love.

This is the second book in the Sisters of the Craft Trilogy. You can find my review for the first book, In the Air Tonight, here. For this trilogy you don’t have to read them in order, but I would say that you should. You won’t be completely confused, but the story will flow a lot better if you do.

In this book we meet the second triplet, Becca. Her power, although she doesn’t realize it until later in the book, is to talk to animals and heal. As a kid she talked to animals, but kids quickly learn not to stick out, so by the time she was an adult, Becca thought she just had a vivid imagination as a child.

The story begins with Becca going for a run, or wog as her brother calls it, half jog half walk. She nears the McAllister house, also known as the Witch House, and sees a light on in the old mansion. Before she goes to investigate, the wolf who she has seen since childhood appears. This gives her a bit more confidence as she approaches the mansion.

Inside is Owen McAllister, Becca’s first love. Owen is home from the war, with his bomb sniffing dog, because they were both on the wrong end of a bomb explosion. He had just discovered the charred remains on various small animals and pets, and is a bit freaked out.

They contact the local sheriff, who earlier that day had mentioned to Becca that black pets had gone missing and to keep an ear out for any information. Becca and Owen are awkwardly waiting for the sheriff to get to the crime scene. Owen even more so because he doesn’t want anyone to realize the extent of his injuries.

The story progresses with people getting killed and branded with a wolf symbol. Once they realize that the killer is after Becca, Owen refuses to leave her side. This causes tension between Owen and Becca’s dad who had basically chased Owen out of town because he feared Owen and Becca were getting too serious.

Towards the end of the book Becca meets her sister Raye, Raye’s fiance and a few members of the their group who are hunting down the witch killers. Becca comes fully into her powers, and the sisters realize they are even stronger together.

A bunch more things happen, but I don’t want to spoil the book too much for you. We meet new characters that will most likely help fight the bad guys in the last book. And you get to find out how Becca and Owen’s relationship works out.

I enjoyed this book as much as the first, and am looking to the final book, Smoke on the Water, coming out August 4, 2015.