The Tale of Two Goblins by H.P. Mallory : Book Review 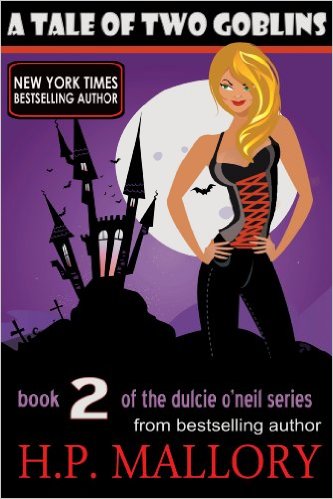 Dulcie O’Neil is a fairy working in law enforcement for the Netherworld.

When Knight Vander approaches her with a case regarding comatose victims, she agrees to help him, imagining the most difficult part will be combatting her attraction to him.

But, what Dulcie isn’t betting on is the fact that the case becomes personal when she learns all the victims are somehow linked to her.

When her best friend falls victim to the Dreamstalker, Dulcie must do everything in her power to ensure her friend’s survival, including associating with criminals and accepting the fact that desperate times do definitely call for desperate measures.

Having enjoyed the first one so much, I was disappointed by the second. It was an okay read, but not as good. I kept putting off writing this review because I wasn’t exactly sure why I didn’t enjoy this one as much. After letting the thoughts percolate for a couple of weeks, I’ve come to realize it’s three different things.

The first reason is the love interest, or actually the lack of love interests. In the first book, there were three, and some could even say four guys, lusting after Dulcie. But in book two, it was mainly all Knight. Not that that’s a bad thing, but for me it just wasn’t as interesting as when she had a bunch of guys after her.

You do have a bit with the vampire, Brom, at the beginning, but then he disappears for pretty much the rest of the story. You also have Quin, who was her boss in the previous book, reappear. But this time their relationship is completely different. And as for the demon who runs the S&M club, he very briefly gets mentioned.

The second problem is the story didn’t have as much action as the previous one. Granted the bad guy was in a dream world, and when one is sleeping, not a lot goes on. But even when Dulcie and Knight were going around town looking for clues, it was not too exciting.

The final reason is it felt too short. It could be that I had purchased the six book set, and on the bottom of my Kindle it said 23% when the book ended. But that was because it was in regards the first two books, and there are four more to go. The story ended well, and there are a few threads dangling for the next book to start with, but I was just expecting more. This book is only 185 pages, so compared to the 300-500 page books I usually read, it is shorter.

Even though this book wasn’t as good as the first, I’m still looking forward to reading the rest of the series. Maybe Knight and Dulcie will cool off a bit, and she’ll end up hooking up with one of the other guys.