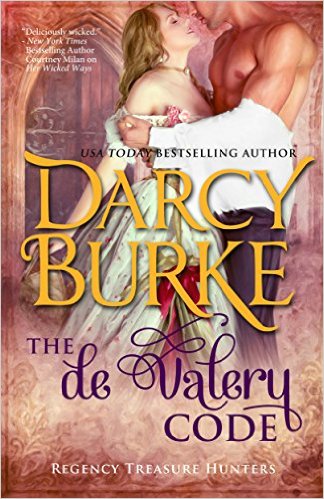 Miss Margery Derrington and her dear aunts are in dire straits. Their discovery of a rare

medieval manuscript will hopefully stave off their creditors—if it’s worth what they hope. Margery reluctantly allies with a reclusive scholar to use the book to pursue a treasure that could exceed her expectations. Amidst danger, secrets, and an insatiable attraction, is Margery gambling just her financial future . . . or her heart?

Academic Rhys Bowen can’t believe he has his hands on the elusive de Valery text. Solving its hidden code and unearthing its legendary treasure would establish him as one of Britain’s leading antiquarians, finally casting him out of his brilliant late father’s shadow. But when a centuries-old organization convinces Rhys of the perils of disturbing the past, he must choose between his conscience…and the captivating woman he’s sworn to help.

I was very excited when I received a copy of this book. I’ve been reading Darcy Burke’s Ribbon Ridge series and have been enjoying it, so I was eager to try one of her historical romances. And the Regency Treasure Hunters Series was a perfect one with which to start.

I have always enjoyed stories regarding treasure hunting. I can not even begin to count how many times I have watched the various Indiana Jones movies. And I also enjoy the Arthurian legends, though my interests lie more toward Morgan Le Fay and Merlin.

Margery’s character was wonderful in how independent she was for the time period. She had been raised by a strong willed aunt, and it showed. She did not want to be married, just because it was expected. And when it came to the adventure part of the story, she did not hesitate to do what needed to be done in order to find the treasure.

Rhys, being an antiquarian, was a bit of a hermit, choosing to study manuscripts over getting married and having a family. Although he does have a foster son, whose lineage is being kept secret, and should be interesting once it is revealed in a future book in the series.

Although Rhys keeps to himself, he has been with women. So when he steals a kiss from Margery he knows exactly what to do. Margery has never been with a man before, but the chemistry between them is very intense. They try to keep their lips and hands off of each other, but then we wouldn’t have a romance, now would we.

The kisses leading up to the sex scenes leave the reader wanting more. And once they finally sleep with each other, it is hot, very hot. Burke does a wonderful job writing the scenes. In some books I skim over them, either because there are way too many or they are not well written. But Burke had me reading every word because they were so good.

And of course there is the mystery part, and I do love a good mystery. Margery is trying to sell her family’s manuscript so she can get enough money so she doesn’t have to worry about getting married. When she approaches Rhy with it, he instantly knows that it could lead to treasure. So Margery is of course, up for the adventure.

That’s where the fun begins. There is the the question of travel, with Margery being unmarried. But that is pretty easily fixed by hiring a companion. But there is a group of people who keep trying to steal the manuscript, and the other one that is loaned to them. Margery keeps being put into danger, although she handles herself very well, especially if there is a fire poker lying around.

But because of the danger, Rhys insists that he and Margery say that they are married, so he can stay in the same room as her. Margery is offended by this, because she feels that she can take care of herself, but at the same time, she really likes being near Rhys. They do solve the mystery at the end, but there are a lot of suspicions and double crosses along the way.

Besides the storyline, I really enjoyed reading the descriptions of the clothes, architecture and manners. I had never realized how much went into getting dressed back then, with all the extra pieces. Makes me glad I can just slip on a dress and not have to worry about stays and what not!