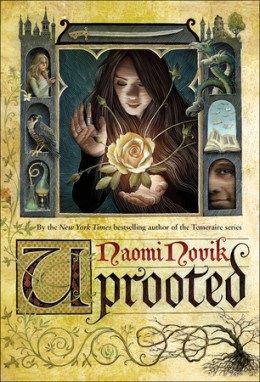 “Our Dragon doesn’t eat the girls he takes, no matter what stories they tell outside our valley. We hear them sometimes, from travelers passing through. They talk as though we were doing human sacrifice, and he were a real dragon. Of course that’s not true: he may be a wizard and immortal, but he’s still a man, and our fathers would band together and kill him if he wanted to eat one of us every ten years. He protects us against the Wood, and we’re grateful, but not that grateful.”

Agnieszka loves her valley home, her quiet village, the forests and the bright shining river. But the corrupted Wood stands on the border, full of malevolent power, and its shadow lies over her life.

Her people rely on the cold, driven wizard known only as the Dragon to keep its powers at bay. But he demands a terrible price for his help: one young woman handed over to serve him for ten years, a fate almost as terrible as falling to the Wood.

The next choosing is fast approaching, and Agnieszka is afraid. She knows—everyone knows—that the Dragon will take Kasia: beautiful, graceful, brave Kasia, all the things Agnieszka isn’t, and her dearest friend in the world. And there is no way to save her.

But Agnieszka fears the wrong things. For when the Dragon comes, it is not Kasia he will choose.

This book was amazing. You should stop reading reviews and buy the book right now.

Fine. If you insist on reading more reviews first…

This was not a retelling of Beauty and the Beast, but various elements reminded me strongly of that fairy tale. The young woman, Agnieszka, being sent to the castle with the Dragon (or Beast). And just like the Beast, the Dragon is grumpy and constantly irritated with the woman. But there is so much more to the story.

The fateful day finally arrives and the Dragon comes to the village to select his next tribute, everyone is shocked when he chooses Agnieszka over Kasia. But while Kasia is the most beautiful (and trained how to please a man), Agnieszka has a spark of magic that the Dragon sees, so he must take her.

Once back at the castle the Dragon allows Agnieszka to begin training at her own pace. She is scared, angry and confused (why didn’t he take Kasia) so it takes her some time to realize that the Dragon is not going to harm her. The Dragon starts to teach her small magics, like changing her outfit, since she is constantly filthy. But this small amount of magic is very hard for her to perform, and drains her energy.

Agnieszka comes across a journal that the Dragon considers to be nonsense, since none of the magic in their works for him. But Agnieszka intuitively knows how to do the spells. This magic is more feminine based, and instead of demanding the magic do what you want, you gently follow the magic to where it leads.

Her understanding of magic comes just in time. The Dragon is out of the tower on a call, when great tragedy befalls Agnieszka’s village. She knows the Dragon is too far away for him to be able to help, so she goes to her village to assist them. This is where she sees that the Woods is not only a place that corrupts people, but actually it’s a thinking entity, that has laid a plan to destroy the village.

After arriving back at the tower, the Dragon comes to realize that Agnieszka has begun to come into her own on the magical front. This makes him even more irritated because she did it on her own, from a book that doesn’t work for him, and she isn’t able to recreate her spells for him to be able to use.

Life in the tower just settle downs and Kasia ends up being taken by the Woods. Agnieszka just reacts and goes to save her. The fight is very hard, but she ends up saving a form of Kasia. But the Dragon and Agnieszka must work together and perform a spell to keep the Woods from overtaking her with evil.

Word spreads, and the prince, who’s mother the Queen, was taken by the Woods many years ago, wants them to save his mother. This is where the book, which was very good so far, turns excellent. Now the reader gets entrenched in politics, corruption, assassinations, and war.

Agnieszka is sent to court where she must try and understand the rules that no one ever taught her. While she awkwardly stumbles through, her loyalty to her village and Kasia help her to stay focused and accomplish great feats.

If you are looking for a fun, fast fantasy, I highly recommend Uprooted. I am looking forward to seeing if Novik undertakes rewriting any other fairy tales.