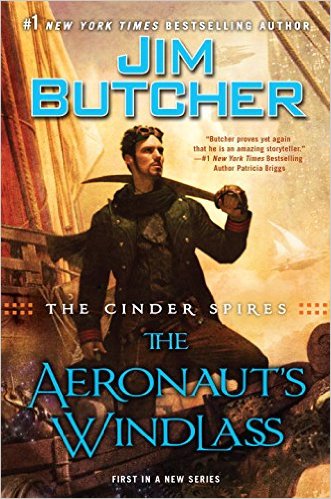 Since time immemorial, the Spires have sheltered humanity, towering for miles over the mist-shrouded surface of the world. Within their halls, aristocratic houses have ruled for generations, developing scientific marvels, fostering trade alliances, and building fleets of airships to keep the peace.

Captain Grimm commands the merchant ship, Predator. Fiercely loyal to Spire Albion, he has taken their side in the cold war with Spire Aurora, disrupting the enemy’s shipping lines by attacking their cargo vessels. But when the Predator is severely damaged in combat, leaving captain and crew grounded, Grimm is offered a proposition from the Spirearch of Albion—to join a team of agents on a vital mission in exchange for fully restoring Predator to its fighting glory.

And even as Grimm undertakes this dangerous task, he will learn that the conflict between the Spires is merely a premonition of things to come. Humanity’s ancient enemy, silent for more than ten thousand years, has begun to stir once more. And death will follow in its wake…

This epic fantasy with some steampunk thrown in, was an awesome read.

If you are a die hard Jim Butcher fan, like myself, you are going to read this book without even checking out the reviews. But if you’ve never read anything by Butcher, you may be curious. I will say that you should also read his Dresden Files books, which are an excellent ongoing series.

I was a bit concerned since I do not read a lot of Steampunk or Sci-Fi books that deal with air/space ships, so by the title and cover, I figured most of the book would deal with being on or fighting on one. This was not the case. There’s a small bit at the beginning and a larger part at the end, but mostly the story takes place on the ground.

I will admit at the beginning I skimmed a bit when Butcher was describing various things about the ship, but the end scenes had me reading every word. It just goes to show how great a writer Butcher is that he is able to make me want to read about airships and how they work.

The detailed world that Butcher writes is amazing. You can actually feel yourself fighting air battles or walking through a monk’s fortress to their great library. And the characters are so well developed. You feel so much compassion, or hatred for them, and this is just the first book.

There are three groups of heroes that come together to fight a very disturbing villain, and at the end of the book we realize that there’s even worse to come. The first is a group of students training to be Spire guards.

There’s Gwendolyn, heir to the Lancaster house, that makes the best crystals that fuel the airships. She can be a bit of a bully when it comes to getting what she wants, but her loyalty is fierce. Her cousin, Benedict, is Warriorborn. Which means that he has enhanced senses, and is often snubbed by his fellow peers for being different.

There’s Rowl, cat and prince of the Silent Paws of Habble Morning, who is my favorite character. Butcher writes the way a cat thinks and acts perfectly. And then we have Rowl’s human, Bridget, aka Little Mouse. Bridget may seem slow at times in her thinking, but she is very intelligent and a great asset to this group. Her patience with Rowl helps her to be patient with mere humans as well.

The next group is a disgraced Captain Grimm and his crew on Predator, a very fast and agile airship. The last two that make up the three groups is Master Ferus, a crazy etherealist, and his slightly mad apprentice, Folly.

The three different groups and their storylines come together through fate to help battle Madame Cavendish and her followers.

Cavendish is a ruthless etherealist who respects and demands good manners while being perfectly willing to kill you. There are many skirmishes on land while the good guys are trying to figure out what is going on, with an epic air battle towards the end.

But of course, not everything is so straight-forward, and there are even more enemies emerging and perfectly setting up the next book in the series. Which makes waiting for the next installment incredibly difficult.