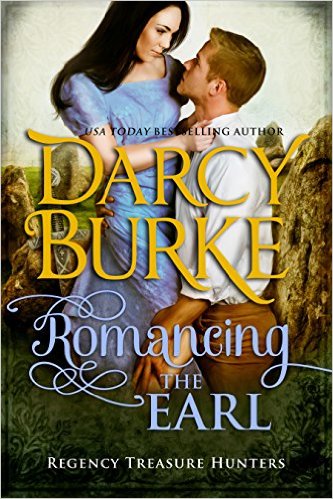 Major Elijah Hollister never wanted to be an earl, particularly not when it meant losing his brother. When a bold adventuress shows up at his door seeking a treasure map, Elijah suspects his brother’s death may not have been accidental and that the lady knows more than she’s willing to share. Whether she’s a friend or foe, Elijah plans to keep her close—and hope the temptation of her kisses doesn’t ruin them both.

Miss Catriona Bowen can almost taste the fruits of her years-long quest to find one of Britain’s greatest treasures. The discovery will deliver the recognition and respect she deserves as an antiquary, despite the fact that she’s a woman. However, to find the map that will lead her to success, she must ally herself with a stoic, yet provocative gentleman with a different goal. And when a villain threatens their lives, she realizes too late that love is the greatest treasure of all.

This is the second book in Darcy Burke’s Regency Treasure Hunters series. It can be read as a stand alone book, but if you were to read the first one in the series, The de Valery Code, you will get even more out of some of the side characters. And you will know a lot more about Catriona’s (or Cate) parents.

Cate follows in her father’s (Rhys Bowen, from book one) footsteps when it comes to wanting to be the best in the field of antiquities. She is on the search for the fabled flaming sword, Dyrnwyn, from Arthurian legends. With most men in the field, and being of the fairer sex, as major obstacles for her, Cate had always thought at least her father had her back. That is until she finds out information that Rhys had hidden in his study.

Thinking that her father is keeping things from her (which of course he is, but only because of his need to protect her, and a promise he once made) Cate begins searching for the sword on her own. The clue leads her to Major Elijah Hollister (now Lord Norris), who recently moved back from Australia, and received the title of Earl, after his brother died.

Cate arrives with her traveling company, Grey, at Elijah’s residence. Lord Norris is immediately taken with Cate’s persistent nature and sense of adventure. From his discussion with Cate, Lord Norris begins to suspect that maybe his brother didn’t die in a accident, but was murdered. He also thinks Cate is keeping information from him, so he wants to keep her close as he begins to investigate his brother’s death.

They travel to various towns and estates (of friends, and maybe foes) looking for clues to where the sword may be, and information as to what really happened to Lord Norris’s brother. Along the way we catch up with some characters from the first book, and find out what they have been up to.

There is lots of danger, mystery and intrigue along the way, which has the story moving along very quick. And of course, there is lots of sassy banter between the main couple. There was never a question of whether Cate and Norris would get together, but if it would be a complete scandal, since Cate isn’t interested in marriage, only being Norris’s mistress.

The sex seams are just as steamy as in the first book, with the perfect amount of build up. But at the same time there’s not so many, that it feels like you’re reading erotica. Darcy Burke does a wonderful job in creating just enough intimate scenes, and leave you craving more.

I am looking forward to the next book in this series, and perhaps finding out more about Cate’s adopted brother, Penn.