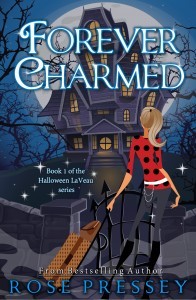 When Halloween inherits her great-aunt’s manor, she decides to put the house to good use as a bed-and-breakfast. Her first guest is the sinfully good-looking Nicolas Marcos, but he’s not here for the continental breakfast. Halloween discovers a ratty old book in the attic. It’s written in an unfamiliar language.

Halloween soon learns this is not an ordinary spellbook. The tome brings her a new talent, but her new skills come with a catch. When a rival witch comes after the book, Halloween doesn’t know who to trust–the sexy vampire who says he wants to save the day, or the warlock who says he can destroy the book once and for all.

I wanted to love this book since it’s about a woman who finds out she’s a witch, and of course not just any witch, but a powerful one. Plus she lives in a giant manor and her name is Halloween. How cool is that?!?

But alas, I found it just so-so. My biggest complaint is the character development, or lack thereof. Halloween’s best friend, Annabelle, is scared of everything. Which gets really annoying fast. There is no way to develop her if she keeps needing to leave the scene because she is afraid of something.

The two guys, Nicolas and Liam, keep insisting that they do not know each other, but they obviously do. Halloween, aka Hallie, acts completely oblivious to this fact, until very late in the book. To me, as a reader, this was not only irritating, but insulting. Instead of repeating over and over that the guys were hot, and having them disappear from the house, doing only the goddess knows what, tell us what they are up to or how they know each other. Their back story is essential to the story, and yet we get only a tiny bit towards the very end.

And it wasn’t just the lack of character development, but just weird parts to the story. Hallie owns a bed and breakfast, but when Nicolas shows up in the middle of the night she freaks out. What?!? You want to have people showing up without prior reservations, that’s how you stay in business. This gives Annabelle another opportunity to be scared about strange (but hot, because we have to keep saying how hot they are) men showing up.

Then there’s Hallie’s magic, which has been completely dismal up until she finds the book. Afterwards her magic is perfect, and yet she doesn’t even for a moment wonder why. It’s just like, “Oh, Hey. That’s cool.”

While the premise could have made this book great, the repetition, strange story quirks and non-development of characters left me with no desire to read any more books by Rose Pressey.