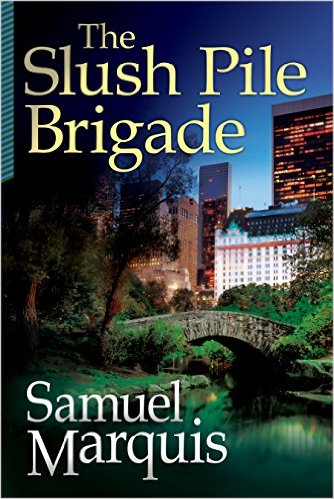 On his thirtieth birthday, Nick Lassiter has lost his girlfriend and his job, is wanted by the police, and has discovered that his unpublished thriller, Blind Thrust, has been stolen and turned into a blockbuster movie called Subterranean Storm. Even worse, the movie is based on a soon-to-be best-selling novel by Australian thriller writer Cameron Beckett, one of the world’s biggest brand name authors. Rather than seek revenge through a financial settlement or public humiliation, Lassiter sets out for New York to obtain mea culpas from Beckett and his renowned literary agent, whom he is certain colluded with the Aussie in stealing his debut novel.

Unexpectedly aided by his CIA father, Director of the Russian Counterintelligence Desk, and his former girlfriend turned CIA-informant, Lassiter and his comrades take to calling themselves the Slush Pile Brigade. Outmatched and outgunned, they are foiled at virtually every turn but still they are determined to win. But will justice be attained? Can they prove that Beckett and his crooked literary agent have stolen Lassiter’s blockbuster novel and are undeservedly reaping the success? And more importantly, will they solve one of the most important counterintelligence cases in CIA history and actually live to tell about it?

I had never really thought about all the books that are sent to editors, and don’t get printed. But Samuel Marquis not only did, but wrote a fast-paced thriller that gives us a glimpse into the world of publishing.

Even before reading the credits at the end, you can tell that Marquis has had experience dealing with publishing houses. At times I felt as if his anger towards traditional publishing houses came out through his characters. It helped to add another layer to the complexity of the characters.

And to tell you the truth, there were times I was getting angry myself, thinking of how difficult some publishers have made it for people to get their stories out to the world. But looking at some of the terrible books that have been self-published, I also realize that editors have a difficult job.

There were a couple of things that stood out to me, which I can see Marquis improving upon in future books.

The first is how some of the characters talked. At times it didn’t feel completely fluid. And some of the things that were said, especially by Professor Welsh and Claggebart  were a bit over the top, which also contributed to my problem with some of the dialogue.

But then again maybe people do talk like this, and I have yet to meet them.

The other thing, and this is super minor, is that Marquis kept having the gang refer to their name of The Slush Pile Brigade. It just felt forced at times.

All in all a very interesting premise for a book, and a wonderful thriller. I’m looking forward to the future adventures of The Slush Pile Brigade!