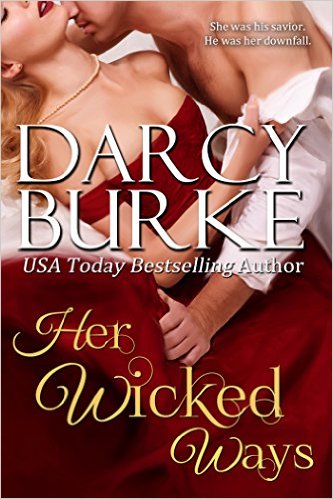 She was his savior

Banished from London for her reckless behavior, Lady Miranda Sinclair is robbed by a dashing highwayman en route to the country. By offering him a kiss in lieu of the jewels she had to leave behind, she commits the very type of act that caused her exile. When her dour guardians extend her punishment to performing charitable work at the local orphanage, she’s further tempted by the home’s owner, a provincial gentleman who stirs her passion in a most wicked way.

He was her downfall

Desperate to save his orphanage from financial catastrophe, Montgomery “Fox” Foxcroft leads a double life as a highwayman. The arrival of wealthy, well-connected Miranda, whose kiss he can’t forget, presents a lawful opportunity to increase his coffers. His problems seem solved—until she rejects his suit. Out of options and falling for the heiress, Fox must risk what principles he has left and take advantage of her wicked ways—even if it ruins them both.

I really enjoyed the premise in this novel. Miranda is sent to the country for the summer instead of enjoying the season in London. She is spoiled and use to doing what she wants. She meets Fox who, although not titled, owns a lot of land, a house and an orphanage.

But he is overworked and does not have enough money to keep up repairs. Miranda is made to help at the orphanage, and she slowly grows into a caring partner.

Of course there is a lot of other stuff that happens along the way. I loved that Fox quickly proposes marriage to Miranda in order to get her dowry to help with the repairs on the orphanage, but she says, “No.” And continues to say no throughout the book. She was not wishy-washy like a lot of the female characters are in romance books. That was super refreshing to me.

The steamy sex scenes are what I have come to expect (and really enjoy) from Darcy Burke. When Miranda and Fox were in the brothel, Wow! But what was even better, is that the brothel scene was actually an important part of the story line. Burke didn’t just put it in there to have another sex scene.

The characters were well written, and had lots of depth. I wanted to strangle Miranda’s parents. The choices Fox and Miranda made, completely made sense, and I wanted to cheer them on at times and cry for them other times.

Another wonderful book by Darcy Burke, and I’m looking forward to the next one in her Secrets and Scandals series, His Wicked Heart.