The Opposite of Wild by Kylie Gilmore : Book Review 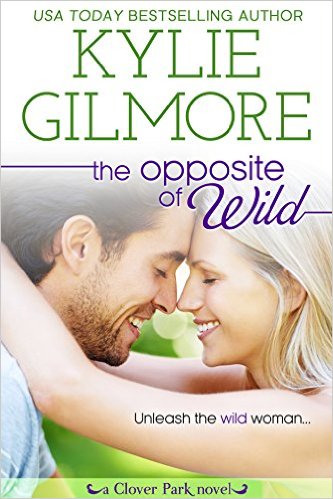 Ex-cop Ryan O’Hare takes one look at buttoned-up control freak Liz Garner and just itches to loosen the woman up. Not that he’s into her. Because a woman like that comes with way too many expectations. Not to mention, she practically works for him, and he didn’t hire Liz to watch after his beloved Harley-stealing Gran so he could turn Liz loose in his bed. Still, there’s something about her, a hidden wild side, that makes him wonder what it would take.

Liz must be crazy to work for the insensitive, arrogant, horribly…hot man she’s avoided for years. Unfortunately, she needs the money and Ryan’s grandmother needs a keeper. (Midnight tango lessons and ziplines with Gran, anyone?) Ryan’s rare smile and swaggering confidence have Liz torn between throwing her favorite pinot grigio at his head or throwing herself at him. Can this control freak find a way to let loose with the tough, no-strings guy who once broke her heart?

This story was good, and would have been great if Liz was not so annoying.

Okay. You had a traumatic experience with Ryan years ago at the public pool. Either you get over it and be with him, or you don’t get over it. If you don’t, then you don’t need to be with him. Move on with your life.

Or better yet, why not communicate with him. If you can’t talk to him about something that happened about 20 years ago, what are you going to do when something happens in your relationship today? Oh that’s right, act all snarky and pull away.

If it wasn’t for the other characters, mainly, Maggie, Ryan’s grandmother, I don’t think I would have finished the book.

Maggie, who raised Ryan and his two brothers, is now in her early 70’s. She recently had a car accident, and realized she has a lot of life in her, and wants to live it to the fullest. After she steals Ryan’s Harley, Ryan thinks his grandmother needs someone to watch her. This is where Liz comes in.

There was a lot of potential with Liz and Maggie’s relationship. Maggie helps Liz loosen up a bit, but it’s not soon enough. If it had happened about a fourth of the way into the story, I think it would have been a lot better read. I really enjoyed watching the adventures that Maggie dragged Liz into. And when Maggie found a lover who was 20 years younger, it was great reading the family’s reaction, and Maggie basically telling them to bug off, because she didn’t care.

I did start the second book in the Clover Park series, Daisy Does It All, because the premise of the book sounds good. I’m only a few chapters in, so I hope Daisy isn’t as annoying as her younger sister.