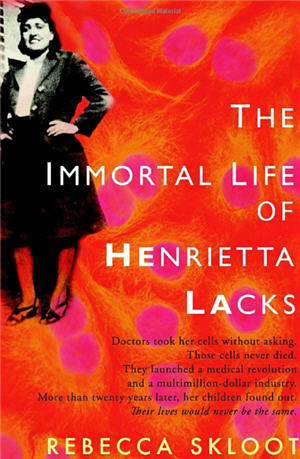 Her name was Henrietta Lacks, but scientists know her as HeLa. She was a poor Southern tobacco farmer who worked the same land as her slave ancestors, yet her cells—taken without her knowledge—became one of the most important tools in medicine. The first “immortal” human cells grown in culture, they are still alive today, though she has been dead for more than sixty years.

Henrietta’s family did not learn of her “immortality” until more than twenty years after her death, when scientists investigating HeLa began using her husband and children in research without informed consent. And though the cells had launched a multimillion-dollar industry that sells human biological materials, her family never saw any of the profits. As Rebecca Skloot so brilliantly shows, the story of the Lacks family—past and present—is inextricably connected to the dark history of experimentation on African Americans, the birth of bioethics, and the legal battles over whether we control the stuff we are made of.

I have been wanting to read this book for five years when I first read the dust jacket. If these type of facts were taught in school, I think a lot of kids would enjoy learning more.

Not only did I put off reading the book, but it’s taken me about two weeks to write this review. I want people to read this book because I think it is a fascinating part of our history, but the second half was a challenge to get through.

It was very interesting reading how they treated cancer back in the 1950’s. I was actually reading parts out loud to my husband because it was so terrifying. And then I started thinking, fifty years from now, just how barbaric are the treatments we use today going to seem.

All the science of gathering the cells and finding cures for different diseases was also a great read. And it makes you think a lot about the ethics that were lacking in medicine back then, and still are today.

Then there’s the oral history of the Lack’s family. It was fascinating. Some of the experiences the people had were so sad and degrading, but many of them showed a great inner strength.

I could see this being a great read for a book club because I think there would be a lot to discuss.

Then you get to the second part where Rebecca Skloot is talking about meeting the family and the years it took her to make them feel comfortable with her to get the information. There was so much back and forth. They trusted her, they didn’t. I think Skloot was trying to show how much went into research, but it just got repetitive and monotonous. The people who I had been feeling bad for, I started feeling unsympathetic towards instead.

I want to give the first part, five stars and the second part , one star. But I want people to read it. I recommend reading it, but know that there’s a good chance you’ll not want to finish.