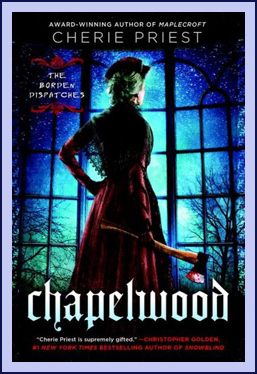 Birmingham, Alabama is infested with malevolence. Prejudice and hatred have consumed the minds and hearts of its populace. A murderer, unimaginatively named “Harry the Hacker” by the press, has been carving up citizens with a hatchet. And from the church known as Chapelwood, an unholy gospel is being spread by a sect that worships dark gods from beyond the heavens.

This darkness calls to Lizzie Borden. It is reminiscent of an evil she had dared hoped was extinguished. The parishioners of Chapelwood plan to sacrifice a young woman to summon beings never meant to share reality with humanity. An apocalypse will follow in their wake which will scorch the earth of all life.

Unless she stops it…

Another great book in The Borden Dispatches series. For me, this one had even more tension than the first one.

Detective Wolf has aged as well, settling even more into his large body, which does not do well in the southern heat. He ends up in Alabama because his long time friend, who happens to be a priest, is killed on the front steps of his church in the middle of the day. Det. Wolf feels that it is somehow connected to the supernatural elements that he became aware of many years before, so he goes down to investigate.

Thirty years has passed since the previous book, Maplecroft, and Lizzie Borden has lost her sister and almost sole companion. Lizzie is still watching the newspapers for strange going-ons, so she is not surprised when Det. Wolf calls her up in regards to a strange case down in Alabama.

Lizzie is excited for another adventure, even if it does leaving the cats that she has started taking care of. (But she does have people from the animal rescue to come in and look after them.)

There are many similarities to the first book in regards to the story, but as I mentioned before this one was even more intense. Cherie Priest does a great job in slowly building up to climactic moments. She is also a master at writing in various points of view. Each character whose voice she writes in feels unique, and I was engaged with each character.

This book also introduces us to new characters. Ruth is the daughter of the man who shot Father Coyle. She is a very strong and intelligent woman, who wants to see justice done even though she is battle strange forces and the KKK.

I do wish Priest spent a little more time on Leonard. I think it would be a fascinating read in regards to him slowly going crazy. And Priest could have included more scenes in regards to his killings. Written well I think they could have enhanced the character and his descent into madness.

Priest ended the book in such a way that the adventures with the supernatural and Lovecraftian themes will be able to continue, and I am really looking forward to them.

To read my review on the first book in the series, Maplecroft, click here. This review also go more indepth into Lovecraftian themes and the Cthulhu mythology.

*I did receive an ARC from Ace/Roc Publishing. I did not receive any money or other incentives for an honest review.