The Witches of Echo Park by Amber Benson : Book Review 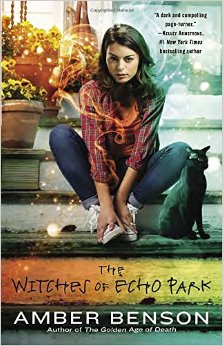 Unbeknownst to most of humankind, a powerful network of witches thrives within the shadows of society, using their magic to keep the world in balance. But they are being eliminated—and we will all pay if their power falls…

When Elyse MacAllister’s great-aunt Eleanora, the woman who raised her, becomes deathly ill, Lyse puts her comfortable life in Georgia on hold to rush back to Los Angeles. And once she returns to Echo Park, Lyse discovers her great-aunt has been keeping secrets—extraordinary secrets—from her.

Not only is Lyse heir to Eleanora’s Victorian estate; she is also expected to take her great-aunt’s place in the Echo Park coven of witches. But to accept her destiny means to place herself in deadly peril—for the world of magic is under siege, and the battle the witches now fight may be their last…

I would have given this book five stars, but the ending was just a bit too unbelievable for me. I know, I know, with witches and other supernatural things it shouldn’t be too far for me to stretch, but it was.

I’ll go into why it was too much for me at the end of the review, so you don’t get any spoilers if you don’t want them.

I came across The Witches of Echo Park about three months ago when I was looking at who was coming to the 2016 ComicCon in Madison. While Amber Benson isn’t scheduled to be there (but it would be awesome if she was), I started thinking about people I would like to see, and the cast of Buffy the Vampire Slayer instantly sprang to mind.

So I decided to see what they were up to, and found out the Benson has been expanding her career as an author. And when I saw she had written a series about witches, I knew I would be reading it. If you’ve read my past reviews you know my catnip is stories about witches. Especially witches just coming into their powers.

This book takes place over a few days, maybe a week at most, and there are so many secrets that come out. The biggest one is that Lyse’s family is full of witches, or blood sisters, and her Great-Aunt is the leader of the coven. Lyse came back to Echo Park because her great-aunt doesn’t have much time left because she is dying of cancer. Lyse, understandably, is taking this really hard… and then she learns about the witches. While she does freak out a bit, I thought she actually took the news pretty well.

There is also a great danger called, The Flood, coming. Not much is known about it, but it’s been foretold. The other danger is that each coven use to have a Dream Walker, but no new ones are  being born, and no one knows why.

Benson does a wonderful job describing the scenery, often lingering on it. Sometimes this is too much for me, but I really think they added to the story. It helped to show the serenity of Echo Park, and to make the reader aware of how magical and important this place is to the witches.

Each chapter of the book is told in the point of view of one of the coven members. Most of the chapters being dedicated to Eleanora and Lyse. I am looking forward to upcoming books when Lizbeth gets more chapters (I think she got two in this book), because I think she could be a fascinating character with her back story, and well as her current one.

There was a lot of character development, often times using flashbacks. I was fine with this because I enjoyed getting to know them, and Benson left little clues in the flashbacks as to what was/is coming, not only in this book but the next ones.

Now for the ending that was just too much for me. Spoilers ahead!

The ending happened very fast, which having read a lot of Urban Fiction, this happens more times than not. So this was not what put me off so badly.

It was an obviously violent, and probably crazy, character showing up at the end of the book. While the characters do something to get rid of him, they take no precautions afterwards. They do not contact the police. They do not stay together and watch out for each other. If they thought he was dangerous enough to get rid of, why would you not doing something more.

Then Lyse gets kidnapped, and ends up killing the man. Once again no police are contacted, and as far as I can tell, the body is still in the park. Um….

Also Devandra, another blood sister, has two children. Towards the end, when they start talking about seeing ghosts, no one thinks to investigate further. They are female children of witches. Witches whose powers seems to transfer down through their children. Why is no one talking to them, trying to find out if they really are seeing ghosts, and perhaps, these ghosts can help the witches with the upcoming Flood. Their mother is even ignoring them, until the very end.

But these two major plot flaws won’t stop me from reading the next book in the series, The Last Dream Keeper, coming out the beginning of January 2016.