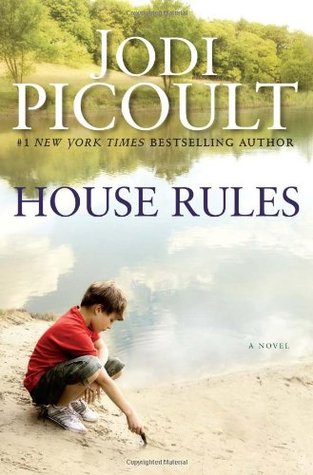 Jacob Hunt is a teen with Asperger’s syndrome. He’s hopeless at reading social cues or expressing himself well to others, though he is brilliant in many ways. But he has a special focus on one subject—forensic analysis. A police scanner in his room clues him into crime scenes, and he’s always showing up and telling the cops what to do. And he’s usually right.

But when Jacob’s small hometown is rocked by a terrible murder, law enforcement comes to him. Jacob’s behaviors are hallmark Asperger’s, but they look a lot like guilt to the local police. Suddenly the Hunt family, who only want to fit in, are directly in the spotlight. For Jacob’s mother, Emma, it’s a brutal reminder of the intolerance and misunderstanding that always threaten her family. For his brother, Theo, it’s another indication why nothing is normal because of Jacob.

And over this small family, the soul-searing question looms: Did Jacob commit murder?

I was hooked on this book immediately, but quickly started losing steam. I love True Crime and CSI shows, and this book had that in spades. Jacob’s Asperger’s has him get transfixed completely on a certain subject, and crime scenes happen to be the most current one. If it wasn’t for the crime scenes and mystery of what happened to Jess, I would not have enjoyed this book as much.

As far as the mystery goes though it was pretty easy to figure out what happened early on in the book. Perhaps this is because I read a lot of mysteries, but I didn’t feel like it was a very strong question as to what had happened.

Jodi Picoult tells the story from various character’s points of view. There is Emma and her son’s, Jacob and Theo. As well as the Detective and Jacob’s lawyer. Each character had their own voice, and I felt that Picoult did great in developing Emma, Jacob and Theo’s personalities, the detective and lawyer, not so much.

I do not know anyone with Asperger’s, but did a little research to learn more about the condition. It seemed as if Picoult took everything that could be seen in a person with Asperger’s and put all the personality traits into Jacob. I don’t know how realistic this is, but I guess there are some extreme cases.

This is where the book started going downhill for me. I was put off a little by how the reader keeps getting lectured on the traits, not only by Emma, but by Jacob’s psychiatrist as well. When the psychiatrist took the stand, it felt as if I was in a classroom lecture.

Picoult also touched on all the various things that people think contribute to Asperger’s including; vaccinations, food allergies, and genetics. But it was once again, mentioned over and over.

The other thing that really put me off was with all that Emma does to help Jacob (sticking to a routine, special foods, supplements, pressure blankets, etc….) she doesn’t take time to listen and be with her kids. At various points Theo tries to tell her about what happened to Jess, but Emma just ignores him.

And Picoult keeps stressing how Jacob can’t lie, and if you ask him a direct question, he will tell the truth. Why did Emma, or even the lawyer, never ask, “Jacob, what happened at the house? Did you kill Jess? Do you know who killed Jess?”

I think Picoult was trying to show how stressed a single mother with an Asperger child can be, but if Emma wanted to keep Jacob out of prison, I would hope she would think of this. And the lawyer was pretty new to his craft, but come on, how much more basic can you get?

And at first I was really annoyed with the ending, but the more I thought about it, the more I was okay with it. This was Jacob’s story, and it was told. And I don’t mind making up my own ending as to what happened to the other characters.

A lot of people I know rave about Picoult’s books, but I just didn’t love this one. After reading other people’s comments, perhaps I started off with one of her not so great ones. But because of this, I have no rush to read more of hers, when there are so many other excellent books out there to read.