A Kiss Before the Apocalypse by Thomas Sniegoski : Book Review 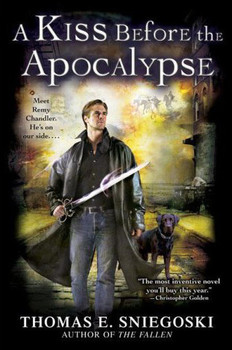 Generations ago, angel Remiel chose to renounce heaven and live on Earth. He found a place among ordinary humans by converting himself into Boston P.I. Remy Chandler, but he can never tell anyone who he was or that he still has angelic powers. Remy can will himself invisible, speak and understand any foreign language (including any animal language), and hear the thoughts of others.

All these secret powers come in handy for a private investigator, especially when the Angel of Death goes missing and he’s assigned to find him. As he gets deeper into the investigation, he realizes this is not a missing persons case but a conspiracy to destroy the human race and only Remy has the powers to stop the forces of evil.

I want to start off by saying, if you are a fan of Jim Butcher’s The Dresden Files, I think you may really enjoy this book. I didn’t notice it as first, I was about half way through the book, but I started to think, What does this remind me of?

Although there are similarities, this book stands on it’s own feet as a fast-paced Urban Fantasy.

Remy Chandler is an angel who chose to come to Earth after witnessing the horrific battle in Heaven that led to Lucifer being sent to Hell. Remy shed his angelic powers (although they are still beneath the surface) and is living among humans.

After being here for many years, he fell in love with, Madeline, his wife. And to round out their small pack, they adopted a dog named Marlowe. Remy does use his ability to communicate with any person or animal, and talks with Marlowe. His chats with Marlowe made me like him even more.

Thomas Sniegoski must have down a lot of research into the various levels of angels and their philosophy, along with Biblical research. That aspect of the book was pretty new to me, and very interesting to read.  The theme of angels being jealous of humankind is not a new story concept, but Sniegoski made it work with all of his extra research and his dynamic writing.

The author also does a great job in showing the conflict warring inside of Remy. There are times when he is getting beaten up, but instead of giving in and using his angel powers, he resists. In this respect it is like the Hardboiled Detective novels. The detective gets roughed up, but still keeps on going.

There is also the pain he feels with his wife dying, but continues to battle for the rest of humankind instead of just quitting, and spending the remaining time with his wife. While this was very hard for him, it’s a choice he must make.

I don’t want to go much more into the plot than what is in the blurb above because I don’t want to give anything away, but Sniegoski set up the secondary characters perfectly for the continuation of the story. We find out who’s Remy’s friends are, and who he has to be wary of.

If you enjoy Urban Fantasy and/or Hardboiled Detective novels, I think you may really enjoy this series. I’m looking forward to reading Dancing on the Head of a Pin, book two in the Remy Chandler series.