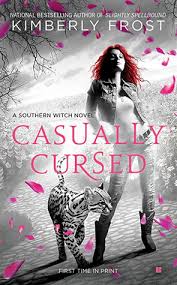 Tammy Jo rarely sets a toe outside Texas, but when she learns her mother is in trouble, Tammy is determined to save her—even if it means going to hell and back…

Fresh off her engagement to wizard Bryn Lyons, Tammy Jo is surprised to make another new family connection when she meets the twin sister she never knew she had. After being spirited away to the fae kingdom of Never as an infant, Kismet has finally escaped, and arrived in Duvall, Texas, with some terrible news:  their mother, Marlee, is a prisoner of the Seelie fae.

Crossing the ocean to battle the fae isn’t Tammy Jo’s idea of a romantic getaway, but Bryn refuses to let her go alone—as do her aunt Edie and her ex-husband Zach. Unfortunately, their plot to free Marlee is foiled when they are caught by the fae queen. And the only chance the queen gives them to save Marlee’s life may be an impossible quest…

I read the first two books in the Southern Witch series while we were on vacation in Virginia, so this series holds a special place in my memories. The first four, I would give a five star rating to, without any hesitation. But not so much for Casually Cursed. In fact I briefly thought of giving it three stars, but the parts with some of the secondary characters was so enjoyable, I decided to go with four stars.

The biggest let down with this book is Tammy Jo and Bryn, and how Tammy Jo treats him throughout the book. In the previous books there was the attraction between the two of them that was very hot. This book, it was just luke warm. Granted they were constantly getting chased or trying to find things, but still.

The other problem with their relationship this book is Tammy Jo was bitchy to Bryn a lot. And they just didn’t seem to work together as much, or as well, as previous books. Unfortunately they are the main characters so their relationship took up a lot of the book. The bits with the secondary characters, Tammy Jo’s aunt and ex-husband were more entertaining, especially her Aunt Edie.

The main adventure that Tammy Jo and her gang is as engaging as the first four books, which is why I enjoy this series so much. Although I could see what was going to happen with Tammy Jo and her twin, Kimet, pretty early on in the book, I was taken by complete surprise with her ex-husband. So that was a wonderful twist.

Looking forward to seeing where the next book goes, since this one ended with some questions. And I would really love Aunt Edie to have a book/series of her own. I think reading about her past adventures would be a hoot.