Portrait of a Dead Guy by Larissa Reinhart : Book Review 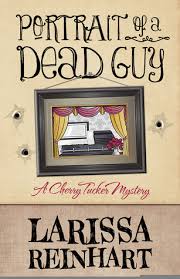 In Halo, Georgia, folks know Cherry Tucker as big in mouth, small in stature, and able to sketch a portrait faster than buckshot rips from a ten gauge — but commissions are scarce. So when the well-heeled Branson family wants to memorialize their murdered son in a coffin portrait, Cherry scrambles to win their patronage from her small town rival.

As the clock ticks toward the deadline, Cherry faces more trouble than just a controversial subject. Between ex-boyfriends, her flaky family, an illegal gambling ring, and outwitting a killer on a spree, Cherry finds herself painted into a corner she’ll be lucky to survive.

I am a sucker for books that take place in the South, especially Georgia. If you’ve read the other reviews on this blog, you’ll know I’m a fan of cozy mysteries. So this was the perfect combo for me, and Larissa Reinhart did not disappoint.

Cherry Tucker is a blast. I know quite a few beer drinking artists myself, and they really do make wonderful people. In Cherry’s case, a wonderful character. The predicaments she finds herself in are very amusing, and added lots of humor to the story.

All of the characters were very well developed, and I found myself instantly rooting for some, and wanting others to be taken down a peg. Especially her high school rival and fellow “artist” (and yes, artist should be in quotes), Shawna.

I also enjoy animals in cozies. I’ve been known to pick a book up just because it has a cute dog or cat on the cover. This one has a feisty goat, named Tater, and he was awesome. I hope he continues to have a role in the upcoming books in this series.

With past series, I stopped reading them because I could not handle the love triangle anymore (after 10 books, you really need to pick someone). Although there is a love triangle of sorts in this book, Cherry knows that she wants Luke, even though her ex-fiance, Todd, still wants her.

Although I do like Luke, I find Todd more intriguing. He seems really stupid, but every now and then you can catch his intelligence peek out. Todd’s also the drummer in his band, and it’s so easy to fall for the hot musician. I really like that Cherry isn’t wishy-washy with whom she wants to be with, but if in a future book, if she chose Todd instead, I wouldn’t be disappointed.

And the very best part of this book was that I was actually surprised at who the killer was. Usually when I read a cozy mystery I know early on who did the crime. I shout out to my husband what page number I’m on when I figure it out, and if it’s before page 70, I’m especially proud of myself. I did figure out the motive quickly once the clue was presented, but this one had me guessing on the killer until the end.

I highly recommend this book, and I am really looking forward to the next book in the Cherry Tucker Mystery series, Still Life In Brunswick Stew.