When We Kiss by Darcy Burke : Book Review 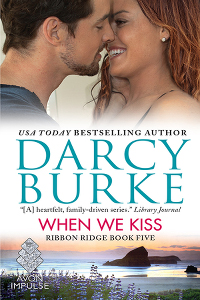 Denver real estate mogul Liam Archer has always been a thrill-seeker, and the loss of his identical twin brother has only intensified his reckless behavior. Sky diving, heli-skiing, motorcycle riding…he’s tried everything once. Except falling in love. Liam doesn’t do relationships, but a no-strings fling with Aubrey Tallinger—the smart, gorgeous lawyer handling his brother’s estate—is totally his speed.

At first, hooking up with Liam whenever he’s in Ribbon Ridge is perfect; but Aubrey fears she could fall hard for the sexy daredevil, if he’d only stop refusing to acknowledge the demons he’s trying to outrun. To protect herself from heartbreak, Aubrey ends their affair. But this time Liam isn’t leaving town, and instead of seduction, he wants to be…friends.

The white hot attraction between them still sizzles, but Liam knows that winning Aubrey back won’t happen in his bed. He’ll have to convince her that he’s more than the careless, adrenaline junkie she believes him to be. Because when they kiss, Liam feels whole again… and he isn’t ready to give her up without a fight.

Another wonderful book in the Ribbon Ridge series! Only one more sibling’s story left to tell, so it will be interesting to see where Darcy Burke takes the series from there.

Out of the previous four novels and the novella, Where the Heart Is, that introduces us to Ribbon Ridge, this one hit me the most emotionally. Liam is the twin to the brother, Alex, who committed suicide before the series began. Not only do we see strong emotions from Liam, but also from Aubrey since she was Alex’s attorney who set up the financial stuff, all the while not knowing Alex’s end results.

It was a rollercoaster ride watching the two of them go through the highs and lows. Not only with their emotions towards Alex, but towards each other.

I also really enjoyed the interaction between them, and the rest of the Archer family. In each book we get more glimpses of the siblings, their significant others, and the parents. In When We Kiss, you see even more interaction between Aubrey and the family, especially the women. The scene when the girls go out to the bar for a night of drinks and playing, Never Have I Ever, is very amusing.

With how much I enjoyed this one, I wrestled a bit with how many stars to give it. It was excellent in so many ways, but the romance trope of we shouldn’t be together, but then one wants to be when the other one doesn’t, went on just a tad too long for me. But it was not as annoying as it could have been thanks to all the engaging emotional scenes that Burke wrote.

As with the rest of the books in the Ribbon Ridge series, it could be read alone, since there’s enough back story to know what is going on. But I would recommend starting at the beginning so you can see the relationships grow.