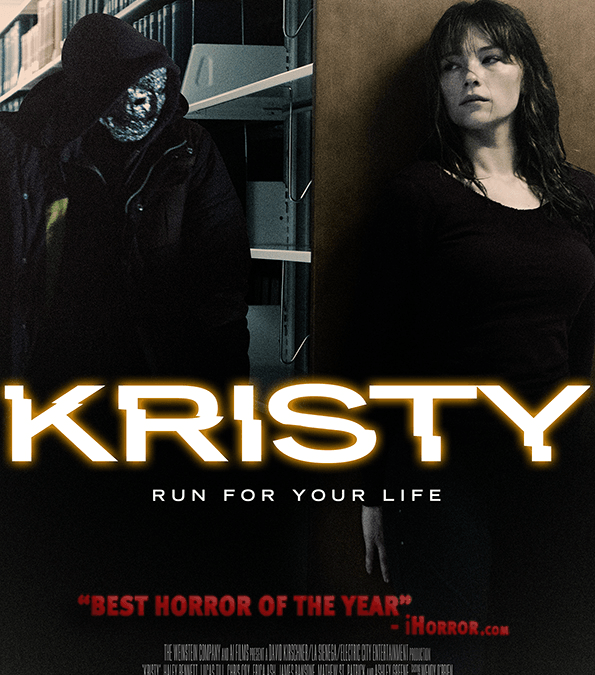 When a college girl who is alone on campus over the Thanksgiving break is targeted by a group of outcasts, she must conquer her deepest fears to outwit them and fight back.

Before I start the review I want to say Haley Bennett, who played the lead, Justine, did a great job. You can feel the struggle she is facing between having to work her way through college, having a rich boyfriend who doesn’t completely get it, and being a tired student. I see she’s playing the lead in the upcoming movie The Girl on the Train. The book was very good, and I can see Haley playing the part wonderfully.

Having spent some holidays alone at college over various vacations, this movie peaked my interest. Although this must be a very small college because she is the only student there. Makes for a good movie, but not very realistic. There are two security guards and another guy who’s house is just on the outskirts of campus.

The opening of the film begins with a young woman being chased down and killed. There’s shaky camera work, and I was concerned that the rest of the movie would be like this, but thankfully it wasn’t.

You get a sense of the Kristy Cult and why they are killing. Kristys are women who are pretty, and pure, and have a good life. Although I’m not sure how they know they are pure, but we’re just along for the ride.

Kristy comes from Christ (although Kristy could be spelled Christy, but I guess that’s too close to Christ and might confuse us??) And I think they are killing them because they don’t like God. To me, this part could have been left out. But perhaps they thought people just killing because they are psycho would leave too many questions for the audience, so they needed a reason.

After that beginning it turned amusing. There was a cheap shot made for the audience to jump, and the flickering lights were explained away well enough. Then we break out into a montage where Justine is dancing around the dorms Breakfast Club style. We also see that she is very athletic from the run she takes and the swimming she does.

I will say, I would have been screwed if I was her, because she did a lot of running from the killers.

Justine goes on a last minute run to the gas station before the guy at the security booth goes home for the night. At the station she meets a weird woman, Violet, with lip piercings and what looked like Meth teeth. There’s a confrontation at the checkout that leaves Justine a bit shaken up.

Getting back to campus, she warns Wayne, the security guard, to be on the lookout for the weirdo from town. And then the fun begins.

The lights start flickering even more, and although Justine has an uneasy feeling, she takes her sweet time getting back to her room. When she gets back there, a video of the various girls that have been killed by the Kristy Cult is playing on her computer. Then her computer goes out and she can’t get a signal. The door slowly starts to open, and we see Violet standing behind her.

Cue the cat and mouse scenes, which I will say were pretty good. My biggest problem is when she goes into the kitchen (that she works at) and doesn’t grab a knife, or even a frying pan. She does do a couple of other things to throw the killers off, so that was good.

Then they’re running all over campus, lots of tension building up, and I was yelling at the TV. I was getting really annoyed, mainly with the key issue. Justine needed a key to get into the doors, and it would have taken her a second, but it didn’t seem like she locked any of the doors behind her. Even when the killers were not that close.

Also at the beginning it seemed like a lot of the dorm doors were open. If everyone went home for the holidays, they would have all been locked. And if Justine had locked her door, there is a good chance it would have took the killers a lot longer to find her.

The movie did redeem itself towards the end though. I enjoyed it, and they did bring the Kristy Cult full circle. If you enjoy cat and mouse thrillers, with a tough heroine, I would say you should watch this one.