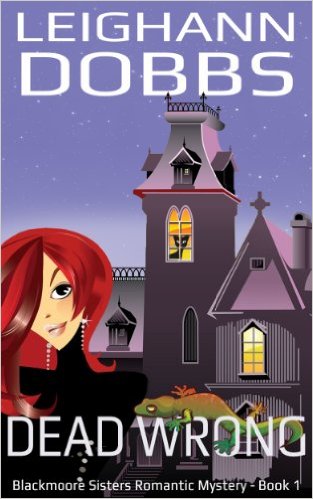 Morgan and Fiona Blackmoore enjoy their simple life in the sleepy ocean-side town of Noquitt Maine where they offer herbal remedies and crystal healing for locals and tourists alike.

…Until Morgan is accused of killing the town shrew, Prudence Littlefield.

Suddenly the girls find themselves scrambling to find the real killer while they battle a crooked Sheriff, planted evidence, and a long list of suspects that all had a reason to want Prudence dead.

Add in an old mansion on the cliffs of Maine, an attic full of mysterious treasures, and a cat that has the uncanny ability to show up at exactly the right time and Fiona has her hands full proving the Sheriff’s accusations about her sister being a murderer are Dead Wrong.

I was hoping for so  much more from this book, since it is in the exact center of my wheelhouse. A witch or witches coming into their powers. There were little hints of it going to happen, an old mansion with an attic that the girls never go into and a cat that shows up everywhere, even though she shouldn’t be able to get out.

Fiona even goes up to the attic early on to find something to pawn for bail money for Morgan, and finds an old book. And later on all the sisters finally go to the attic. This would have been the perfect moment to all chant from the book, Charmed style, and find their powers. But alas, no.

I read the synopsis of the other books in the Blackmoore Sisters Mystery series, and they do seem to come into their powers in book three. Even if they do in book two, it’s too late. It should have been in book one!

There is also the descriptions that are used over and over again; blue eyes and stomachs flipping whenever the Sheriff is near Fiona. There are just so many other ways to describe her feelings for the sheriff. And once I know a character has blue eyes, I’m good, you don’t need to keep describing the various colors of blue.

The other really big problem I had with this story is the sheriff just over looking clues that have been tampered with by the Blackmoore sisters. Sure, he may have the hots for Fiona, and his gut may be telling him that something was hinky with his supervisor, but that is not what a police officer does.

This book had so much potential, but didn’t live up to it. I have way too many other books to read to find out if the next book in the series, Dead and Buried, is any better.