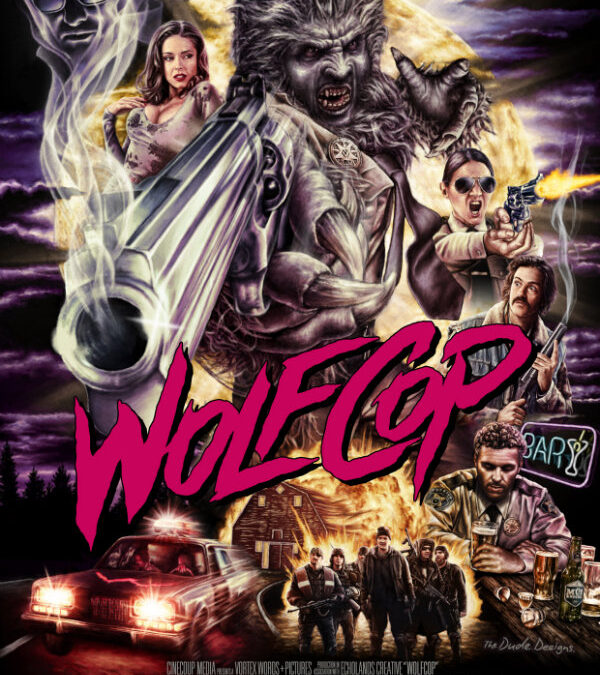 Officer Lou Garou isn’t the best cop in small-town Woodhaven – in fact, he’s probably the worst. He mostly just looks to avoid anything that could possibly interfere with his goal of getting wasted. One evening during the night shift, Lou investigates a mysterious disturbance at the edge of town and wakes up with a pentagram carved in his chest, heightened senses and body hair that’s growing at an alarming rate. To solve the mystery of his transformation, he’ll have to take on a case no normal cop would be able to solve, but this half-man, half-beast is not just a cop…he’s a WOLFCOP.

If you can’t determine by the title that this was going to be a cheesy B-movie, then you need to watch more horror. Neflix kept suggesting I would like it, and I figured their algorithm should know me by now, so I gave it a go. Thank you Neflix for letting me know about this gem.

I will admit I almost turned it off 15 minutes in because of the acting of Officer Lou Garou (Lougarou, in one of various translations, is werewolf in Haitian). He just wasn’t tough enough, or cheesy enough to pull it off. But the actor, Leo Fafard, finally found his groove, but suddenly he had the right about of cheese with his swagger.

I could see this becoming a cult classic. There were lots of quotable lines, and the blood and gore was completely over the top. When Lou turns into a werewolf, chunks of his skin falls off, as his fur pushes through. And the bathroom after his first turn and kills, is completely covered with blood and guts.

Besides Lou, the other characters were just as amusing, and I need to get myself a Liquor Donut shirt!

Wolfcop 2 : Breed the Wolfpack! is supposed to be in production, and I know I’ll be watching the movie when it comes out. If you enjoy Werewolf puns, Cheesy B-Horror Movies with splatters of Gore, I say you’ll have a Howlin’ good time with WolfCop.