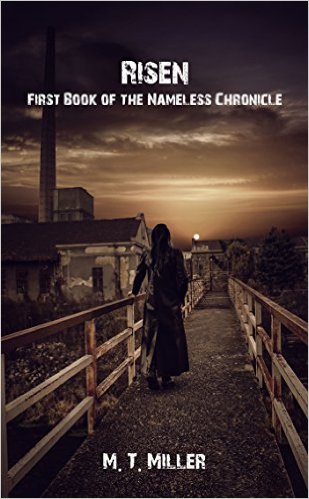 In the middle of nowhere, a nameless individual rises from the dark. With barely any knowledge apart from how to speak and how to kill, he finds himself in a world gone mad. Worse off, nearly everything that moves is out for his blood.

Not knowing where to turn, the wanderer traverses the desolate landscape of a ruined continent. Along his travels, his mind and body are pushed to their limits as he desperately tries to make sense of what is going on, what he is, and why he exists.

Foe after foe meets their end at his hands, yet each kill only serves to raise more questions. Is he even human? What has happened to the world? Where does his path lead?

The answer lies beyond the blood-stained horizon.

I was scared that this was going to be another book about zombies, after all, it does start with a man rising from a grave. But thankfully, it’s not. While the action writing was well done with the first scene, I felt it could have been shortened a bit… only so I could get more of a later scene when The Nameless is being held by cannibals.

I don’t want to say too much about the story line, since finding out what is going to happen next is what makes this book so thrilling. It has an old west feel set in an apocalyptic new world. After the first scene it becomes very fast paced, and I was a bit sad when I got to the end, because I wanted more. But you know it was a good book when the author leaves you with this feeling.

Really looking forward to the next book in the Nameless Chronicles, and seeing what else M.T. Miller will write.