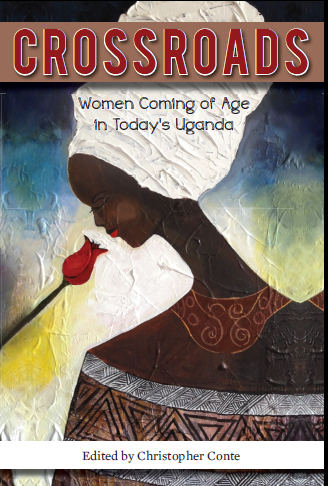 They are rooted in their culture’s rich traditions, yet they stand at the cutting edge of change. This is the crossroads where many Ugandan women find themselves today. With dignity and grace, they play a complex social role, balancing worldly sophistication with reverence for the values of their upbringing.

In Crossroads, a group of these women explore the past that shaped them and the future they hope to build, telling varied stories about a rapidly changing society where they serve both as guardians of culture and harbingers of reform.

While one woman examines the cultural implications of Ugandan names, another describes being tortured in a secret prison, and a third traces the mix of African and imported religions that shaped her. One mocks girls’ traditional sex education, while another voices her love of sports and a third reflects on her struggle to overcome a legacy of growing up in a war zone. All challenge social expectations, yet many view “modernization” with ambivalence.

My minor in college was Women’s Studies, so I’ve read a lot of books similar to this one. Stories of women all over the world; their hardships, as well as the joys in their lives. This one has resonated more with me than many of those I read in college though. It may be because I wasn’t reading this for a class. Or it could be because I’ve had more real life experiences since then, and am able to sympathise with some of the writers. But with many of the stories, it opened an entirely new world to me. One I’ve never thought of before, but now that I know it exists, it will stay with me forever.

I think this book touched me more than others because it was written by the women in a very direct and simple way, making their stories profoundly powerful. A lot of the other books I’ve read about women in other countries were written by an educator trying to understand a culture. Here, the women lay their culture out without any apology or self-consciousness.

In most of the stories there is not a clear cut answer to the problems the women face. They are incorporating new traditions (sometimes Western) with their traditions, and trying to make it work for them. They experience some of the same struggles we do here as women; rape, pedophiles, abuse, and more. But some of what they face is so far from what we deal with, part of me couldn’t even wrap my mind around it. The one instance that really stood out to me was when one of the authors and her friend from college were detained, and then taken to a prison camp, without even knowing why. The trauma they experienced there was something I knew happens. But to actually read an account of someone who went through it was eye opening.

I would encourage everyone, male or female, to read this book. There are so many traumas and miscarriages of justice in this world, and this book reminds us that although you may not be able to fix the system, everyone still needs to do what they can to make a change. The writers in this book are strong women who are living life to the fullest even in the midst of their own doubts, and the sometimes cruel world they live in.