Caught in the Act by Kim Law : Book Review 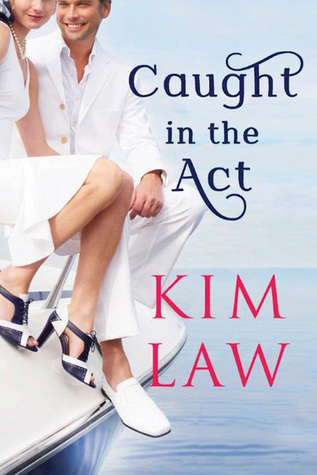 Catherine Davenport Carlton needs a break. After dedicating her life to her political-minded family, shocking scandals from the past have shaken her to her core. Summer in the quiet town of Dyersport, Maine, is just what she needs, especially with a super-hot neighbor right next door…who’s none other than Brody Hollister, the boy she fell in love with as a teen. Cat wants nothing more than to pick up right where they left off eighteen years ago, but she’s still haunted by a terrible secret that could devastate Brody.

Brody Hollister spent years pining over Cat Davenport. They met young and loved passionately—until she disappeared from his life. Now she’s back, as spirited and beautiful as ever. But while Brody is determined to help Cat free herself from her family’s drama, his own family may be hiding something that could ruin their rekindled romance for good.

Being the second book in The Davenport series, I was concerned that I would have questions, but Kim Law does an excellent job of filling the reader in, while having it fit perfectly with what is going on in this book.

I do enjoy the lost love and then found again years later trope in romance novels, and this one did not disappoint. It was sweet when they found each other again, and then when they finally gave into the passion they still had for each other, the sex scenes were very, very hot.

This book was more enjoyable than some romances I’ve read because it actually had more of a story than just the two people falling for each other. The two political families that have been feuding for many years added a lot of drama, alongs with secrets and some shocking reveals. The last secret that came to light though, I felt was a bit rushed. And while I can see why Law put it in, I would have enjoyed it being stretched out a bit more. Maybe it will be explored more in the next book in The Davenport series.