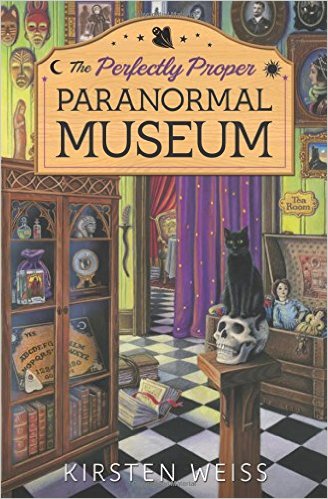 When Maddie Kosloski’s career flatlines, she retreats to her wine country hometown for solace and cheap rent. Railroaded into managing the local paranormal museum, she’s certain the rumors of its haunting are greatly exaggerated. But then a fresh corpse in the museum embroils Maddie in murders past and present, making her wonder if a ghost could really be on the loose.

With her high school bully as one of the detectives in charge of the investigation, Maddie doubts justice will be served. When one of her best friends is arrested, she knows it won’t be. Maddie also grapples with ghost hunters, obsessed taxidermists, and the sexy motorcyclist next door as outside forces threaten. And as she juggles spectral shenanigans with the hunt for a killer, she discovers there truly is no place like home.

I loved this book! I do not know how I have never heard of Kirsten Weiss before, but now that I have, I’m excited to read more of her books.

For numerous reasons this book was like catnip to me. A Paranormal Museum would be a place I would love to work at, and all the research that Maddie is doing on the exhibits would be right up my alley. I have always wanted to have a cat(s) in my work place, and GD is super sassy. And I do love sassy cats.

Then there’s the museums’s next door neighbor. He’s intelligent, works with his hands, and sounds very attractive. Plus he works with motorcyclists, which I find very hot. What I really like about their relationship is instead of letting the will they/won’t they go on forever, he knows that he wants Maddie, and actually does something about it.

And Maddie’s friends seem like people I would want to have as friends. Although Adele is rich, she’s down to earth. And she’s opening a tea shop next door to the museum, and I love tea. Her other friend, Harper, seems very standoffish at first, but when you find out why later on, it would make me want to be friends with her even more. I don’t want to spoil that reveal, but if you’ve read any of my other reviews, you will know what my favorite type of character is, and Harper just happens to be one.

With all the wineries, and people going over to the museum after they’ve had a bit too much to drink, is totally something I could see my friends and myself doing.

Now for reasons why you might enjoy this book, if none of the above is your personal catnip. The description of the town and the shops is done very well. Weiss quickly has you engrossed into the world she has written. The character development is well done for most of the characters, and I can see the ones who didn’t get much time in this book, growing a lot in upcoming books.

There are touches of humor that had me laughing out loud. Besides the sassy cat, there are also amusing quirks with other characters, and the museum itself. There are numerous times that patrons go into the creepy doll room, and Maddie hears laughing. At first I thought it was the patrons laughing, and I wanted to know what they were laughing about. But then I started wondering if it was the dolls, or a spirit in the room. With this, and other things that happen at the museum, I am excited to see how Weiss will write about it in the upcoming books in this series.

A wonderful start to this cozy mystery series. Since this one just came out in March, I will probably have to wait a year (I couldn’t find out when the next one is scheduled for release), and I am excitedly awaiting it already.