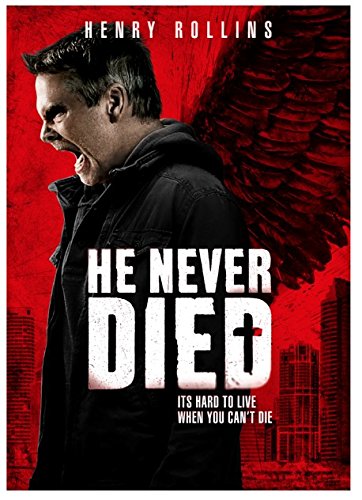 Jack (HENRY ROLLINS) is in a rut.  His existence has been whittled down to nothing.  When he finds his long lost daughter has been taken by the city’s crime syndicate, he must combat his inner demons as he goes on a bloody war path to seek revenge.

I really enjoy listening to Henry Rollins speak, he is a very knowledgeable and entertaining speaker. I’ve enjoyed his acting in previous movies, and Sons of Anarchy. So I was really looking forward to this movie.

I’m happy that I didn’t pay a rental fee to see it. It’s not the worst movie I’ve ever seen (that would be Alex’s Apartment), but it has to be in my top ten of worst films. It wasn’t the actors that made the film not to my taste, but the story line. There was so much potential to the story, but so much time was wasted watching Henry’s character, Jack, lie on his bed, that it didn’t have time to live up to it’s potential.

Jack was depressed, and didn’t want to go on living, but he can’t die, so that’s why he tried to sleep all the time. Okay, I completely understand that, but cutting down on the number of times we see him sleeping, would have allowed more time for story development.

It was about halfway through the movie before we even learn that he has a daughter, and that’s when the action finally starts to pick up. We still see him barely going about his day, but watching him play bingo with his daughter, or interacting more with the waitress, had an endearing feel that added a bit more depth to this movie.

The reveal as to why Jack is the way he is, was very interesting, and I wish they would have focused more on that story line. And the scenes with the violence and gore were done well. I didn’t feel as if any of them were unnecessary, and I was really amused by the shower scene.

If you like Henry Rollins, you may want to give it a watch, but otherwise, I would say that you should find something else to watch.