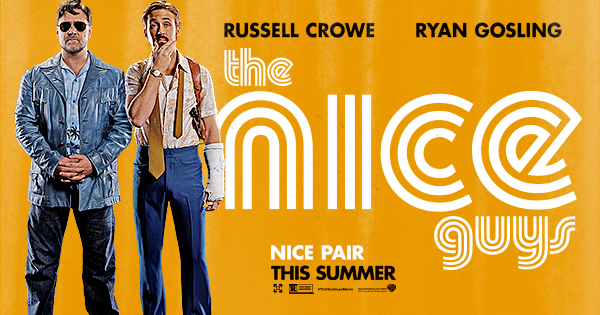 I was reading some reviews on IMDB, and Whoa!, some people really did not like this movie. I went in without any expectations, and just sat back, and enjoyed a detective noir comedy.

So many people were nitpicking about the music being played in the movie not being out yet in 1977 or that Jaws 2 wasn’t out yet. It makes me wonder how many of these people actually knew the release date of these things, or Googled them after (hopefully not during) the movie. To me this is a bit extreme, just enjoy and take in the groovy sounds of the 70’s/early 80’s.

I loved the combo of an enforcer (Crowe) and an alcoholic P.I. (Gosling) that seems out of it, but is actually very observant. I thought they worked well together. They bickered like an old, married couple. It was just the perfect amount to make it amusing, and not annoying.

I think Angourie Rice, who played Gosling’s daughter, stole the movie for me. She was like a non-naive Nancy Drew. While her dad and partner were bickering or floundering around, she jumped right in and did what was needed. It will be interesting to watch her in more movies, and to see if she does as well in them.

All in all, a fun summer movie. A crime noir, packed with physical comedy and lots of nudity and graphic violence…. Four of my favorite things!