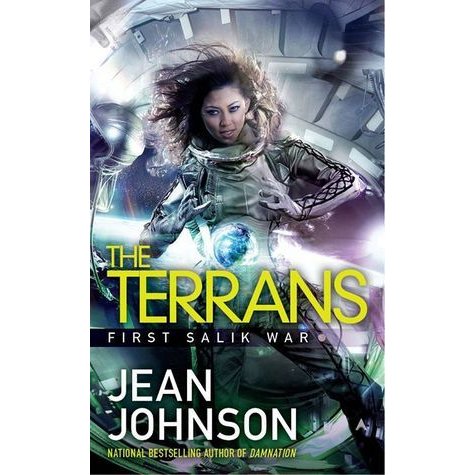 Born into a political family and gifted with psychic abilities, Jacaranda MacKenzie has served as a border-watcher and even spent time as a representative on the United Planets Council. Now she just wants to spend her days in peace and quiet as a translator—but the universe has other plans…

Humans have long known that they would encounter more alien species, and while those with precognitive abilities agree a terrible war is coming, they do not agree on who will save humanity—a psychic soldier or a politician.

But Jackie is both.

After she is pressured into rejoining the Space Force to forestall the impending calamity, Jackie makes an unsettling discovery. Their new enemy, the Salik, seem to be rather familiar with fighting Humans—as if their war against humanity had already begun…

I really enjoyed this book. I wasn’t sure what to expect with The Terrans, and the angle taken on a fairly typical military/space war story was unique and enjoyable to read.

So the basic premise of The Terrans is pretty common military space fare. Humanity goes out to explore the stars, humanity discovers hostile alien species. But there are several interesting twists on this premise. First, the impending war with the Salik aliens is pre-cognitively predicted by earth psychics.

Second, humanity doesn’t discover just one alien race, but two, and one of those species is rather familiar looking….

Third, this is actually more of a political novel than it is a military novel. At a time when humanity has reached a somewhat Star Trek like society, The Terrans is a book that takes a great deal of time to lay out the existing political structure of the United Terran Planets.

That structure is often laid out in character monologues that almost feel like soliloquies. These monologues sometimes get a little tedious, but despite them I eagerly wanted to finish this book and am looking forward to reading the follow up book as well.

The biggest downside to The Terrans is that there was actually very little real conflict, and I don’t mean that in terms of this as a space military novel, (thouth there is little conflict of that nature as well), but conflict as an actual story. The main conflict of the story is essentially of a political nature, but even that, despite the gravity of it, is rather minor.

These points might make it sound like The Terrans isn’t worth a read, but I’d actually disagree. The thing is, it was really nice reading a book where there wasn’t some huge giant conflict with major struggle and death, war, et cetera.

Instead, what we have here is a book that sets up what is coming in this trilogy, but in doing so is also quite interesting and enjoyable to read. The war is coming. That much is made clear in The Terrans, and it was really nice to read a book were a bunch of interesting things happened without all sorts of death, struggle and trauma.