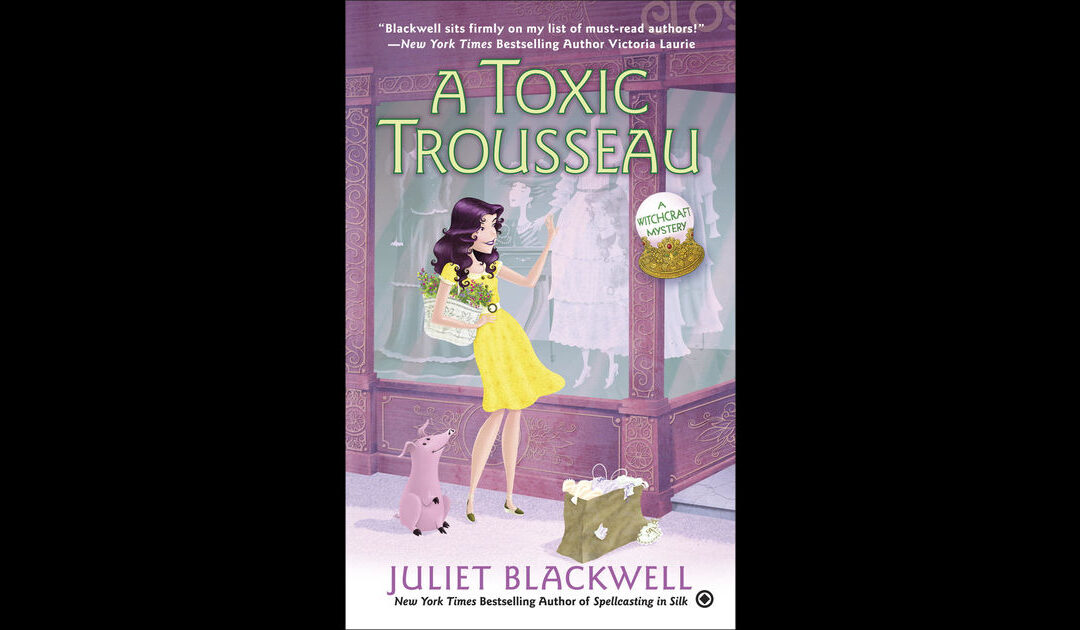 Even the most skilled sorceress can’t ward off a lawsuit, and Lily is not at her enchanting best with her hands full as the temporary leader of San Francisco’s magical community. So after her potbellied pig Oscar head-butts rival clothier Autumn Jennings, Lily tries to make peace without a costly personal injury case.

But any hope of a quiet resolution is shattered when Autumn turns up dead. As one of the prime suspects, Lily searches for a way to clear her name and discovers a cursed trousseau among Autumn’s recently acquired inventory. Lily must deal with a mysterious dog walker and spend the night in a haunted house as she delves into the trunk’s treacherous past. She’s got to figure out who wanted to harm Autumn fast, before the curse claims another victim…

I’ve been reading this cozy mystery series from the first book, Secondhand Spirits, and have enjoyed them all. You don’t need to read them in order, but there are character’s relationships that will make more sense if you do.

Lily Ivory is a very powerful witch who recently relocated to San Francisco after a difficult life in Texas, where she didn’t fit in at all. She owns a vintage thrift store, where two of her closest friends, Mya and Bronwyn, work alongside her. This works out great because they are able to run the store while she is running all over San Fran helping to solve crimes, usually of the supernatural nature.

Lily’s familiar is a pig/goblin named Oscar, who is super adorable. And there ends up being a love/power triangle between her, another powerful warlock, Aidan and a psychic named Sailor. This love and power balance had kept shifting through the previous books, but they are pretty stable by the end of this book. Which makes me so happy, since I’ve stopped reading some other book series when the love triangle just kept going.

As with most cozy mysteries, you will have a regular set of characters who develop more each book. And you also get a handful of new characters, one of which, commits the crime. And I will admit, I did not figure out who the bad guy was before hand.

In the past couple books there were hints of a big evil coming, and towards the end of this book we got a lot more information in regards to it. I am so excited to see where this series is going to lead, and I highly recommend reading the whole series, if you haven’t already.