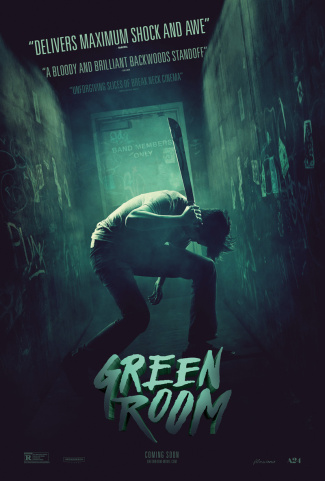 After witnessing a murder, a punk rock band is forced into a vicious fight for survival against a group of maniacal skinheads.

For me, this movie was just okay, leaning more towards meh. It was a little tense at right after they walked in on the dead body, but once Patrick Stewart got there (although his acting was good), it just got boring, and I didn’t really care if any of the punk band got out alive.

Spoilers, so stop reading if you don’t want to know more….

There was just too many, Are You Really That Stupid and There is No Way moments, that happened for me to get into the movie. Now if it was supposed to be a campy B-Movie that would be one thing, but this movie was taking itself seriously.

I knew nothing about it going in, besides that the music in it was punk rock. I didn’t read any reviews, watch any previews, or even read the back of the DVD. I had seen lots of people saying they liked it, so I was really hoping I would too.

First the whole, I’ll trade a gun for a phone. Then the way Anton’s arm was broken, and they just patched him up with duct tape. (Nope, he would be in so much pain and unable to move at all, even with adrenaline pumping through him. He may have been able to do a bit at first, but he would not have lasted as long as he did).

And the way the killings went, they were really fast, so there was not much of a cat and mouse effect happening. I kept thinking it would turn into a werewolf movie, with the meat grinder note, and the way the Nazis seemed like a pack. Maybe it would have redeemed itself a bit.

The best part of the movie for me, was when they told the real music they would take to a desert island. I would say skip this one unless you really like one of the actors, and want to watch it just to see how they do.