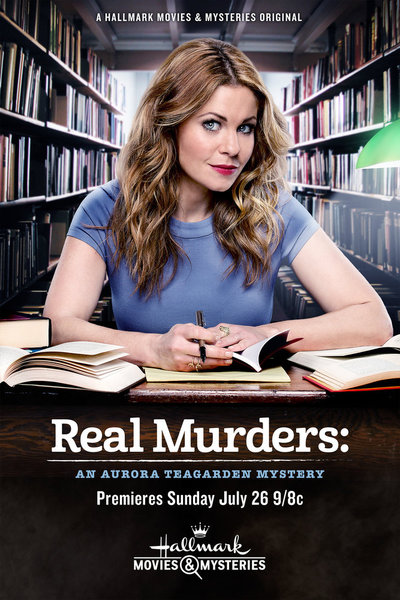 Aurora finds a member of her crime buff group, the Real Murders Club, killed in a manner that eerily resembles the crime the club was about to discuss. As other brutal “copycat” killings follow,

Aurora will have to uncover the person behind the terrifying game.

Although this is the second movie in the Aurora Teagarden Mystery series, the storyline actually follows the first book in the series. Knowing this, I don’t think it matters that they switched around the order.

Once again, Candace Cameron Bure, does a wonderful job in portraying the main character. I love that she is so intelligent, as well as being a bit sweet, but with nerves of steel. The new love interest in this movie, a mystery writer, balances her out perfectly. He’s intelligent too, but uses a bit more caution when it comes to heading into a dangerous situation.

I enjoyed the mystery itself as well, although I knew early on who the killer was, because of a remark that was made, and it just seemed really out of place. But since there was so many deaths/crimes it was interesting to try to figure out how each one was accomplished. And the twist at the end really made up for figuring out who the killer was early on.

Aurora’s relationship with her old boyfriend’s wife changed a bit by the end of this movie, and I’m glad it did. Although there’s still some tension, it wasn’t as catty as it had been. I was also amused again by seeing books by Charlaine Harris during a scene that took place in the library.

If you weren’t aware, this series, along with Sookie Stackhouse series (aka True Blood), and the Midnight, Texas series which is coming to TV later this year (you can read my reviews here, here and here) were all books written by Charlaine Harris.

If you enjoy reading Cozies, or like watching mysteries without blood and gore, then you should give the Aurora Teagarden mysteries a try.