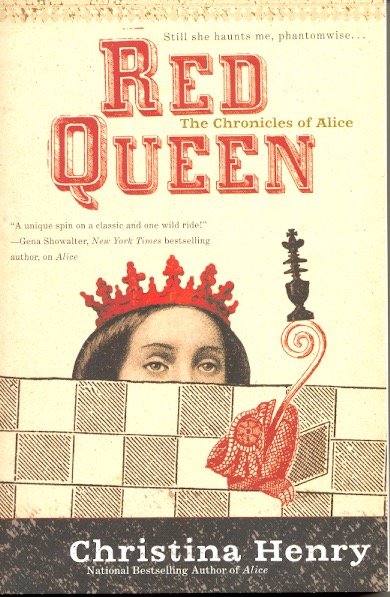 The land outside of the Old City was supposed to be green, lush, hopeful. A place where Alice could finally rest, no longer the plaything of the Rabbit, the pawn of Cheshire, or the prey of the Jabberwocky. But the verdant fields are nothing but ash—and hope is nowhere to be found.

Still, Alice and Hatcher are on a mission to find his daughter, a quest they will not forsake even as it takes them deep into the clutches of the mad White Queen and her goblin or into the realm of the twisted and cruel Black King.

The pieces are set and the game has already begun. Each move brings Alice closer to her destiny. But, to win, she will need to harness her newfound abilities and ally herself with someone even more powerful—the mysterious and vengeful Red Queen…

While this was still an enjoyable read, it didn’t feel as dark to me as Alice (you can read my review here), and there seemed to be a lot more walking and a lot fewer action scenes. What I really enjoyed about Alice was how Christina Henry kept the action tense, then gives you a moment to catch your breath, only to take have the thrills jump up another level. For this book there was a lot more catching of the breath between the action scenes.

And while Alice found out some truths about herself and her character grew, Hatcher had very little character development in this book. There are also less characters in this book, and the ones there are really didn’t inspire me to care for them, except for Pen. The author did such a great job developing four of the bigger characters in the first book, that these characters were just too small to not delve deeper into them.

The world building in the first book was also very well done, whereas with this book, so much of it took place in a forest or on a mountain, that there wasn’t as much to be written about them. Henry did do a good job with the village and small cabin though.

The best scene for me in regards to character and place was in the cave with the goblin and the lovelies. Here is where we caught a glimpse of the dark world that Henry brought forth in Alice.

I feel bad that I wouldn’t recommend this one (but definitely read Alice), but if there is a third book to this series I still give it a read, hoping that Henry gets dark again, and continues with the great character development and world building she did in the first book.