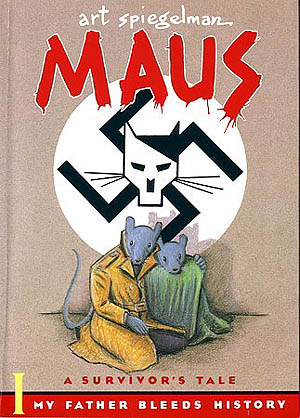 A graphic novel of a Jewish survivor of Hitler’s Europe and his son, a cartoonist who tries to come to terms with his father’s story and history itself.

I read this graphic novel, along with part two, in college, so when it came up again for book club, I gave it another read. This time though we only read the first volume for book club, but numerous participants said they will be reading the second volume to see how the story ends. To me this spoke well of the book, since people wanted to keep reading to find out what happens.

I really do think this book would be good for high school students, and would open up a dialog with them in regards to WWII. It has a couple things going for it, one being that it’s a graphic novel, and seems to be an easier read than history books that are just dates of battles. This book also shows a personal side, that many history books do not.

As for older adults, I can see why they may not enjoy it, since it doesn’t go into as much depth as other non-fiction books. Reading the reviews a lot of people had problems with Spiegelman depicting various groups by the animals that he chose, especially the Polish people as pigs. But this was his father’s memoir, and to me it was showing his father’s prejudice against others. Of course people can take issue with it, and obviously it worked since so many people commented on it.

There are some beautifully drawn graphic novels out there, but this was not one of them. It’s done in black and white and the characters/scenery is pretty plain. I found myself just reading the words and not really paying attention to the artwork. The only time a panel would jump out to me is when one of the characters was wearing a pig mask, which represented a Jewish person passing themselves off as Polish.

So if you’re a teen or teach teenagers, this may be one you want to check out. Or even if you’re an adult and haven’t read a lot about WWII or the Holocaust. But for those of you who have read a lot on this topic already, it may not be one you enjoy.