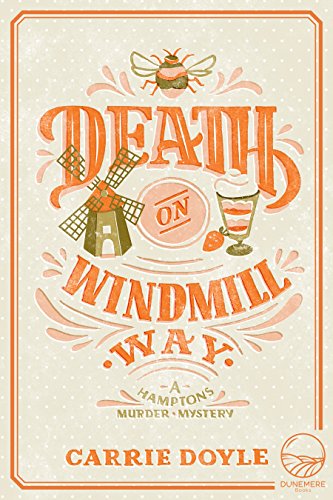 Antonia Bingham, a renowned chef and the new owner of East Hampton’s Windmill Inn, escaped to the Hamptons to get away from a harrowing past. Yet now she finds herself in more danger than ever when she discovers the inn’s previous owners may have been victims of murder. Will her overly inquisitive personality be her downfall as she digs up secrets in her attempt to solve the crime?

This first book in a new cozy series is sure to delight with it’s mouth watering descriptions of the scrumptious food served in the restaurant at the inn, to the gorgeous architect inside the inn, around town, and down at the beach.

This cozy was a bit different than any other ones that I have read. The cozies I normally read come in paperback, whereas this one is a trade paperback (so it’s larger in dimensions), and it was much longer than a lot of other cozies. Whereas most top out at 300 pages, you get 100 more to enjoy with this book.

It took a bit for me to get use to this one since is was so descriptive. A lot of other cozies focus more on the relationships between the characters. While this one did too, I’m thinking that’s where the extra 100 pages came in handy, to encompass all the wonderful depictions.

I am so happy that the possible future love interest is not a law enforcement agent. So many series do this, and while it’s handy for the plot, it is really over done. Another thing that I really enjoyed was the relationship between Antonia and Joseph. Off the top of my head I can’t think of any other cozies where the characters are decades apart in age and are not also both women, that have such a great friendship.

Carrie Doyle included lots of red herrings when it came to the mystery. While I can’t claim that it took me to the end to figure out the killer, I will say that all the various scenarios of who it could have been, were very well thought out. And I really enjoyed how the final showdown to reveal the killer was done in a style that would have made Miss Marple proud.

I highly recommend this mystery, and am looking forward to book two in the Hampton Murder Mysteries, Death on Lily Pond Lane.