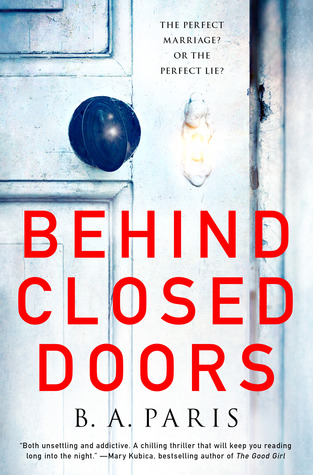 Everyone knows a couple like Jack and Grace. He has looks and wealth; she has charm and elegance. He’s a dedicated attorney who has never lost a case; she is a flawless homemaker, a masterful gardener and cook, and dotes on her disabled younger sister. Though they are still newlyweds, they seem to have it all. You might not want to like them, but you do. You’re hopelessly charmed by the ease and comfort of their home, by the graciousness of the dinner parties they throw. You’d like to get to know Grace better.

But it’s difficult, because you realize Jack and Grace are inseparable.

Some might call this true love. Others might wonder why Grace never answers the phone. Or why she can never meet for coffee, even though she doesn’t work. How she can cook such elaborate meals but remain so slim. Or why she never seems to take anything with her when she leaves the house, not even a pen. Or why there are such high-security metal shutters on all the downstairs windows.

Some might wonder what’s really going on once the dinner party is over, and the front door has closed.

From reading the synopsis, you should have a good idea what this book is about, even though it doesn’t come right out and say it. If you have no idea or want to be surprised, then don’t read any farther.

Spoiler ahead, but to me, not really….

I don’t often read books about spousal abuse, and even less when it’s physical abuse. This book, although about abuse, is more about psychological abuse, which I find fascinating if written well. And this book was.

From the very beginning, you just know that something is off about Jack and Grace’s relationship, but B.A. Paris, does a fantastic job of slowly building up the suspense, and even the horror, of their life together.

I found myself constantly thinking what I would do in Grace’s situation, which slowly deteriorates. Would I have been able to grasp the situation sooner, and done something about it? Would I have left right away? But there is another factor in Grace’s life, which is her sister. Once Paris added that to the plot, things became much more complicated.

I can’t say I was surprised at any of the things that happened to Grace, and Paris could have gone much darker in the psychological torture. But I was happily surprised at the ending. If you enjoy authors like Gillian Flynn or Paula Hawkins, then I highly recommend this book.