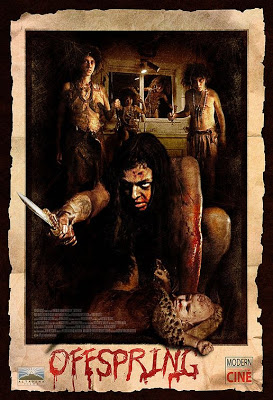 Surviving members of a cannibal clan — long-thought wiped out — re-emerge to feast on residents of a peaceful Maine community.

I first heard of Jack Ketchum, whose story this movie is based off of, when I was looking at some website and it mentioned the book, The Girl Next Door. Although I haven’t read it yet, his name and the book title has stuck with me, since it’s suppose to be disturbing. If The Girl Next Door is as anything like Offspring, then yes it will be.

After the watching the movie, (I’ll get to that in a second), I did a quick search on Ketchum and got this from Wikipedia; “Later, in his teenage years, Ketchum was befriended by Robert Bloch, author of Psycho, who became a mentor to him. He supported Ketchum’s work just as his work was supported by his own mentor, H.P. Lovecraft.”

That would definitely help to explain how his unique mindset was encouraged to grow.

From the first part of the movie, where the cannibal children are sitting on the kitchen counters cackling in happiness surrounded by blood and guts to the rest of the movie with them jumping out and biting people, I said out loud, “And that is one more reason why I didn’t have kids.”

But it was so much more than kids doing that, there was also their inbred parents, along with lots of topless women, and creepy sexual encounters.

If you enjoy a gore fest, this is one you’ll probably want to watch, since there was lots of blood, body parts, and eating of flesh. The pulling out the the intestines was a nice touch.

Movies with inbred people creep me out the most. I can handle clowns and dolls, but people with teeth missing and who only communicate in grunts, is just too close to something that could actually happen.