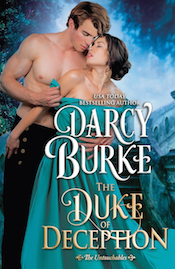 After five years on the Marriage Mart, Miss Aquilla Knox is ready for spinsterhood until a benefactress steps in to help her secure a husband. Only Aquilla doesn’t actually want to marry—her failure is entirely on purpose. When the earl she’s nicknamed the Duke of Deception sets his sights on her, she refuses to be drawn in by her attraction to him. If there’s one thing she knows it’s that a gentleman is never what he seems.

Edward Bishop, Earl of Sutton, has a reputation for courting young misses and dropping them without a second thought. This has earned him a reputation for deceit, a description he can’t refute because he does in fact, harbor secrets and will do anything—deceive anyone—to ensure they don’t come to light. As he comes to know the charming Miss Knox, his resolve is tested. However, trust comes at a price and Ned won’t pay with his heart.

Another fantastic read in The Untouchables series! In the first two books The Forbidden Duke, (Review Here) and The Duke of Daring (Review Here), I was happy to read a Regency Era Romance where the heroine wasn’t a vapid woman, constantly falling in and out of love with the same man. And Darcy Burke has written yet another romance without an insipid heroine.

When Aquilla first meets Edward, she is very frank with him, and even tells him that she and her friends call him the Duke of Deception. While this make him a little leary, since he really does have a big secret he is hiding, he also finds her refreshing and intriguing.

While Aquilla also enjoyed the exchange, she doesn’t want to get married because of the horrible relationship her parents have, so she puts Edward out of her mind. But they keep running into each other.

Although their courtship is very brief, and Aquilla had not wanted to get married, she readily accepts her new life, including his love for her, and sex for the first time. This is one of the reasons I really enjoy this series. There is no constant wishy-washy, does he love me/do I love him, that can get very tedious if played out too long. As I have come to expect from Burke’s books, the sex scenes are very hot. And their first time together was very sweet, with a wonderful touch of humor.

As for the secret that Edward is keeping, it’s a good one, that I don’t want to spoil here. But I will say that it shows a part of Regency life that was very real, and that I haven’t often seen in other romance books.

I highly recommend this one, and while it can be read as a stand alone, you really should start with the first book since the same characters appear across the books. And make sure to check out Burke’s other series; Secrets and Scandals, The Ribbon Ridge Series, and the shoot off of that series, Love on the Vine.