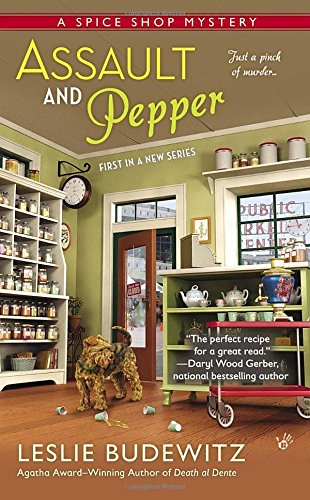 After leaving a dicey marriage and losing a beloved job in a corporate crash, Pepper Reece has found a new zest for life running a busy spice and tea shop in Seattle’s Pike Place Market. Her aromatic creations are the talk of the town, and everyone stops by for a cup of her refreshing spice tea, even other shopkeepers and Market regulars. But when a panhandler named Doc shows up dead on the store’s doorstep, a Seattle Spice Shop cup in his hand, the local gossip gets too hot for Pepper to handle—especially after the police arrest one of Pepper’s staffers, Tory Finch, for murder.

Tory seems to know why she’s a suspect, but she refuses to do anything to curry favor with the cops. Convinced her reticent employee is innocent, Pepper takes it on herself to sniff out some clues. Only, if she’s not careful, Pepper’s nosy ways might make her next on the killer’s list…

I read a lot of cozies, and the series that I really enjoy all have one thing in common; the characters are well developed and I want to keep coming back to see what is going on in their lives. For this series though, which I really enjoyed, it doesn’t have the strong development, but it has a very strong sense of place. Budewitz’s description of Seattle’s Market Place and her spice shop really, really makes me want to visit.

Pepper and Fabiola are written very well, and we get to know her ex-husband, Tag, pretty well too. But most of the other characters, not so much. But that is easy for me to let slide since this is a the first book in the series. I think there is just so many character that there is no way Budewitz could develop them well in one book.

And Pepper’s employee, Tory, who was in jail for murder, I had no feelings for at all. She was written as a private person, but since she didn’t have my sympathy, or even dislike, I really didn’t care what happened to her. But I do think and hope as the Spice Shop Mystery series progresses, I will feel like I’m getting to know the characters better.

I do really recommend this book for the amazing view we get of Seattle, and as a good mystery with lots of possible suspects.