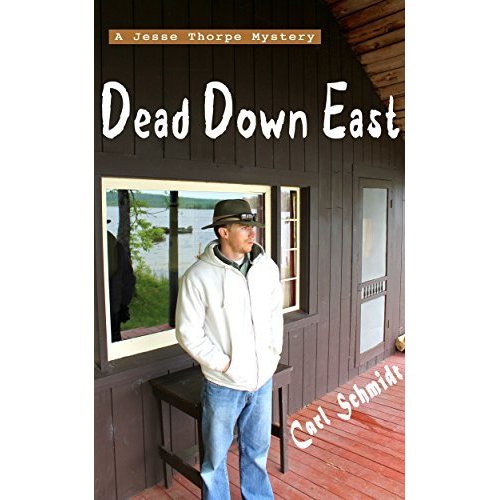 Dead Down East, a fictional murder mystery, is both detective noir and smart screwball comedy rolled into one. Jesse Thorpe, a young private investigator operating out of Augusta, Maine, receives a mysterious phone call from a former client, Cynthia Dumais. She begs to be rescued from an island south of Brunswick, within a mile of where William Lavoilette, the governor of Maine, was assassinated the night before. She insists that her life is in danger, but is unwilling to provide any further information. Reluctantly, Jesse goes to fetch her.

Within a week, Jesse has three separate clients, each with his, or her, own desperate need to have the murder solved. He assembles a motley team of compadres, including rock band members, a tie-dye psychic and his rousing girlfriend, Angele Boucher, to help him with the case. While the FBI and the Maine State Police investigate political motives, Jesse looks for the woman—Cherchez la Femme—as the trail draws him through the lives, and DNA, of the governor’s former mistresses. Fresh, witty and loaded with eccentric characters, this first novel in the Jesse Thorpe Mystery Series is both clever and stylish. It’s an old-school private eye tale with inventive twists and local charm. If you enjoy a well-crafted and zesty narrative, lively banter, or take pleasure in the company of Mainers, you’ll love Dead Down East.

I was a bit leery when I started reading, concerned that it would be filled with fishing scenes, (one thing I really do not enjoy doing), but after the opening, which was written well and gave some thoughts to ponder upon, I delved into a world of politics filled with lots of secrets and suspects.

To me it seemed like Schmidt put a lot of himself into this book, from the fishing to the band, which is something I always enjoy. After reading a book like this, I want to take the writer out for drinks to see just how much of their life corresponds with the book.

The dialogue flowed really well between the characters, and his descriptions of the people and various spots in Maine, made it very easy to visualize what you were reading. The mystery itself was done wonderfully with lots of suspects, and it had me guessing until the end.

There are two things that had me reminding myself that it’s a piece of fiction, and the author can write however they want. The biggest one was where Jesse borrows a police officer’s uniform, to impersonate an officer, and the office knew about it. It’s just really hard for me to accept that, even if it was so they could catch the killer.

And the other, and this is more tongue in cheek, is having a Sauvignon Blanc with lasagna. I just can’t picture it pairing well, but that just means I’ll need to try it sometime.