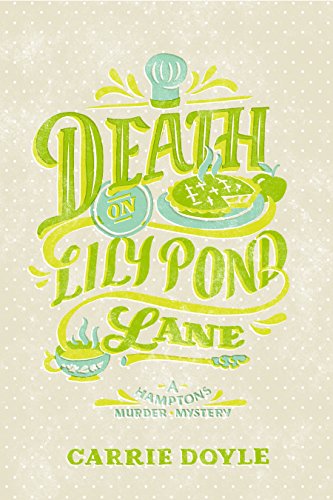 Springtime in the Hamptons comes late, but it’s worth it! Brisk walks on the bright chilly beach, cinnamon buns at tea time, blooming forsythia and…murder? East Hampton innkeeper and chef Antonia Bingham has settled in to town and taken on extra work as an estate manager, giving her entree her into some of the area’s most glamorous homes. Once inside, Antonia checks the heat, looks for leaks or damage, and finds the occasional dead body. Since the police can’t be trusted, it’s up to Antonia—a modern day Miss Marple, with an overly enthusiastic adoration of carbs and a kamikaze love-life—to put her skills of deduction to use.

Nestle in with a steaming mug of your favorite tea and get ready to peek behind the gates of the mansions of the Hamptons, as Antonia Bingham solves another shocking and devastating murder in Death on Lily Pond Lane, the second book of Carrie Doyle’s Hamptons Murder Mystery series.

There have been many series that I’ve read where the second book isn’t as wonderful as the first. This is not the case with the second installment in the Hamptons Murder Mysteries. I think I may have liked this one a little bit better than the first one (which I really enjoyed), mainly because we get to learn even more about the characters, as well as more gorgeous descriptions of the Hamptons, and Antonia’s Inn and restaurant.

And speaking of characters, I really like Antonia and Joseph’s relationship. He may not be able to get around very easily, but his research skills are the perfect balance to Antonia’s detecting skills. And as I mentioned in my review for Death on Windmill Way (click here to read), I am so happy that the love interest isn’t a police officer, it’s just so overdone. In book two, we get to see some more advancements in Antonia’s love life, and I’m really liking the direction it may be going.

The mystery in this one had me guessing until towards the end, which is always fun. And the fast action that took place once the killer was found out, really had me reading quickly so I could find out what would happen next. I am very much looking forward to the next book in the series.