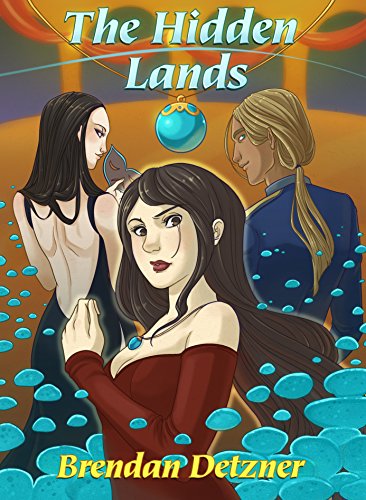 In the aftermath of the Dragot Empire’s failed attack on the Mountain skyport, seventeen year old Amber, former bride of the invasion’s commander and current traitor to the empire, is on the run. Alone and pursued by Dragot assassins, she seeks political asylum in the Hidden Lands, a mysterious and isolated alliance of countries on the far side of the world, and is taken to the Embassy District, a refuge for political criminals, abandoned spies, and lost souls from every corner of the earth. Everyone has an agenda and no one is who they appear to be. Amber must figure out who to trust quickly, or the shadows of her new home will swallow her whole.

This novella was completely different than The Orphan Fleet (read review here), the first book in the series. And I enjoyed it just as much, but for different reasons. The first book had lots of action, and Brian Detzner created a very detailed fantasy world. In The Hidden Lands, there is a lot less action and more character interaction. Even the writing style was different. In The Orphan Fleet, it was jarring for me at first because of the short sentences and the dialect of the world. In book two, there was no dialect to get used to, and the descriptions were more detailed and painted wonderful images of the people and new land.

The Hidden Lands also had a slower pace than the first book, but it was written in such a way that I wanted to see what would happen next. There is also a mystery incorporated into the mix, since Amber has an attempted made on her life, and then must figure out who it is.

While this is part of a series, Detzner includes enough back story that you could read this one by itself. But with any series, I prefer to read them all in order, because I catch more details. And I usually find myself caring for the characters more each book. If you enjoy Young Adult Fantasy, you should definitely give this book and series a read.