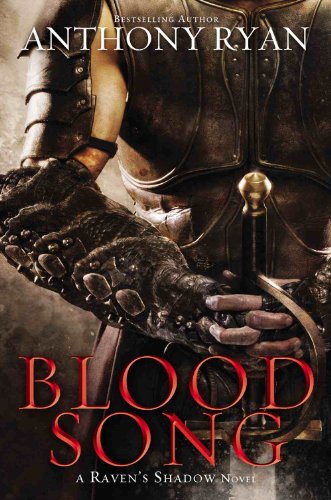 Blood Song by Anthony Ryan is a great fantasy novel. I’m always a bit wary starting a new fantasy book by an author I’ve never read because so many fall so easily into genre tropes that it feels like you’re reading a book you’ve read a hundred times over already.

Blood Song very nicely avoids falling into that trap with a very compelling main character. Vaelin Al Sorna is a young boy who is raised as a warrior of the Sixth Order of the Faith.

The story begins with Vaelin as an adult. The basic plot setup is similar to Patrick Rothfuss’s Name of the Wind, in which Vaelin is relating his tale to an historian.

As I started reading the book I was a bit worried that Vaelin would come off as a Mary Sue, but it didn’t turn out that way. While Vaelin is capable, he’s not perfect, and I found him to be a very compelling character.

Blood Song follows Vaelin’s time from childhood through his training in the Sixth Order and into his exploits in the world, including discovering the secrets of the Order of the Faith that he serves as well as getting embroiled in politics. It ends at the beginning, setting up the second book nicely, and left me wanting more. I’m looking forward to reading Tower Lord, the second book in the Raven Shadow trilogy, and I hope it is as good as Blood Song.